Flight VN431 from Incheon International Airport takes off ten minutes late due to heavy traffic, but it’s all good. I’m not in a rush. I’ve got the latest episode of EastEnders downloaded on iPlayer (there’s no individual in-flight entertainment system on this regional Vietnam Airlines flight to Da Nang), my book and a tonne of PDFs I’ve saved chock full of things to do in Hoi An and how to use the controls on a camera to read and study.

The check in agent has given me an aisle seat in the first row of economy, and I’ve ample legroom to fit my 6ft 5in frame into. In fact, I feel I’m more comfortable than in any premium economy cabin I’ve ever flown in. There’s no one next to me, so I’ve got the whole row all to myself. It’s gonna be comfortable flight.

That is until some Korean jerk from three rows back jumps into the aisle seat I’ve vacated, covers his head with his blanket and falls fast asleep – just when I need the toilet.

I nudge him awake and come back and spend the rest of the flight in the window seat. At least I’ve got the chance to take photos out of the window as we fly over the Philippine Sea and cruise along the coast of Vietnam.

The flight goes smoothly, and we arrive in Da Nang on time. It’s a long wait at immigration, and it’s humid and stuffy in the waiting area. A couple of flights have landed almost at the same time and there’s about three hundred people in there. The sweat starts to drip down my back.

My driver tells me that he waited so long he was about to head away, thinking I hadn’t made it. We pass through the throngs of mopeds, cyclists, women walking with baskets of bananas and pedestrians stepping out in front of us, slip over the bridge next to Da Nang’s dragon bridge, and head down the coast to Hoi An. It’s about a 30-minute drive (about 25 kilometres), and the pick up costs $15.

As we approach the town through the paddy fields, the sky is darkening. Thick, heavy, black clouds lay across the mountains. I check in and sit on the balcony in my room for ten minutes, and then the heavens open.

Regardless, it’s 4 pm, and I’m keen to get myself a Vietnamese coffee. When I was in Saigon and Hanoi three years ago I was I addicted to these things. I’m happy I decided to pack a raincoat at the last minute, and I borrow a rusty old umbrella from the hotel reception and step outside into the streets.

Every couple of minutes I must stop due to the downpour. Luckily, many shops have awnings outside. However, the streets are narrow and packed with carts selling bahn mi, alcohol, coconut juice, and other street food, and the pavements are narrow and slippery. The streets are flowing like rivers now. Since I’ve been dripped on and my shoes are already soaked, I decide there’s not much point in trying to stay dry, so I plough on and head into the Ancient Town of Hoi An.

For those not in the know, Hoi An is a small port city in central Vietnam that was a major trading port in between the 15th and 19th centuries. It is a blend of Vietnamese, Japanese and Chinese architectural styles and influences, and it was designated a UNESCO World Heritage Site in 1999 for its well-preserved buildings. It sits on a small river and is intercut with several canals. During the day time, the Old Town is closed to traffic, letting visitors and cyclists wander through the charming streets.

The town is famous for its lanterns, which are strung across every street and hung outside every building. Visitors can buy a lantern and float it down the river to make a wish. It makes for a peaceful and charming sight at night, and once a month on the full moon the town’s lights are switched off and locals gather to celebrate.

My first port of call was Hoi An Roastery, a cute little coffee shop in the centre of the town on Le Loi street. I’d passed a few places but this was one place I felt compelled to try. The coffee was great, and the atmosphere was quite hip and bohemian. It’s a bit more expensive than buying from a street vendor – my iced coffee was 50,000 dong compared to 20,000 on the street – but it was a lovely place to sit for half an hour and watch the lights come on and the people passing by. It has since become one of my favourite spots in the town. 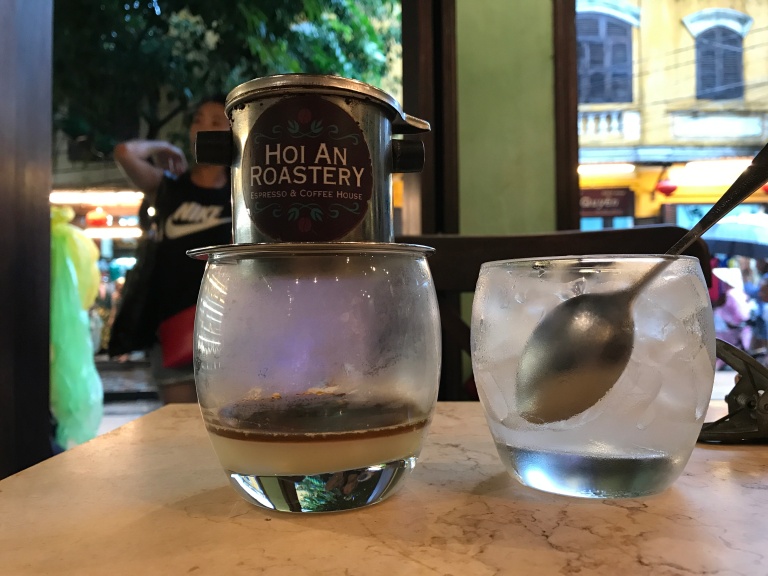 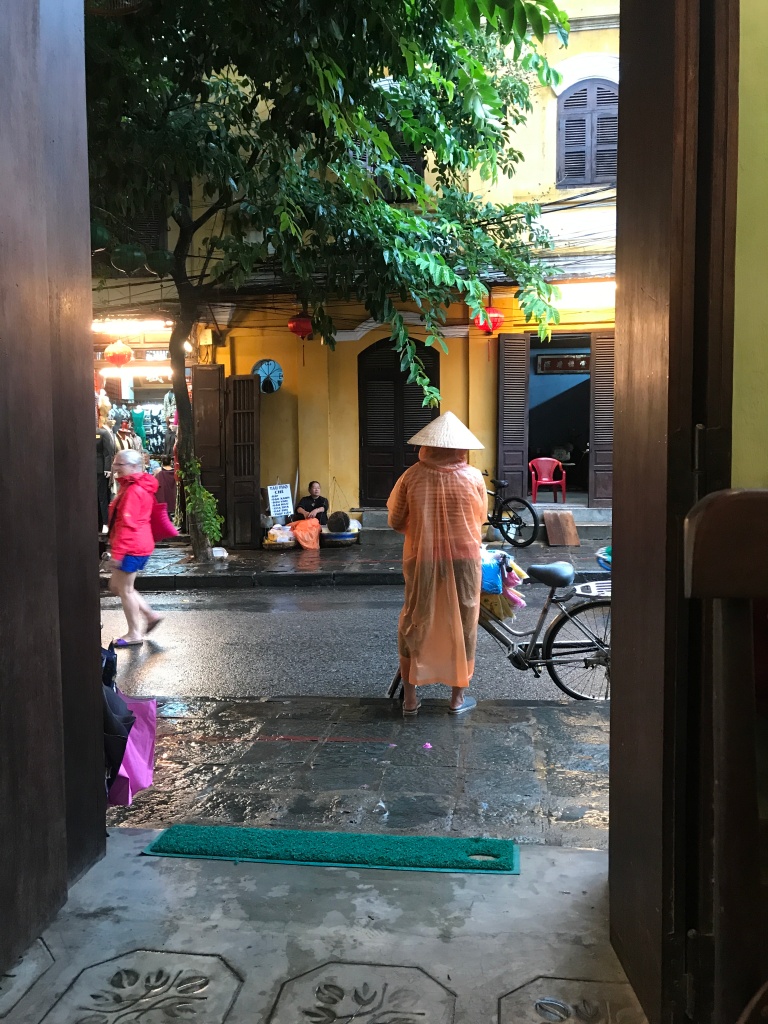 But I wanted to take in as much as I could. At night, the streets in the Old Town are lit up by the lanterns, and the restaurants, shops and galleries are all tasteful and funky. Here is where you’ll find the more gourmet types of restaurant – Morning Glory comes highly recommended, both from friends who have eaten there and online reviews, as does Streets, a restaurant whose purpose is to help underprivileged youths gain culinary careers.

Tonight, however, my dinner is in the market, mainly because a lot of the restaurants were full. The central market is a fun place to eat. As you enter, several women brandishing menus will appear and try to corral you to their stands, where you perch on a small metal bench and your food is prepared and served in front of you. In all my research, it was recommended to eat cao lau, a dish of noodles in a pork gravy served with slices of pork and croutons that is a regional speciality and not often found outside central Vietnam. Of course, this is what I ate, with a side of spring rolls.

I wandered back through the town. It was still raining and lightning was flashing in the skies above the town. It was cool and fresh, and I began to feel that my worries about Vietnam being so hot were unfounded. It was fun to walk the streets and watch the people and soak up the atmosphere – and try to take photos, of course. I’m not good at night photography, so I kept my camera on automatic mode. At every turn there are so many charming scenes.

I crossed the river to get a view of the Old Town from the other side. Along the riverside, old women and young children sell candles in cardboard lanterns, the idea behind which is to float them in the river and make a wish as you do so. I understand that the lanterns are cleaned up later so as not to pollute the water. It’s certainly a pretty sight, though I haven’t bought one yet. In Saigon and Hanoi I found the people to be rather pushy, but here they accept a simple ‘No thank you’ and wander way. From what I read, you should pay no more than 10,000 dong for a lantern, and don’t buy from children.

Another option is to take a boat ride along the river. The boats are usually helmed by old women who paddle from the back of the boat.

On the other side is the night market, the entrance to which is marked by lantern sellers. Down this street you’ll find lots of souvenirs for sale – necklaces, lacquerware pots, etc. as well as street vendors selling mango cakes, Vietnamese doughnuts and bahn mi. It’s a rowdy area, but the sellers are not pushy and it’s a nice street to wander around. 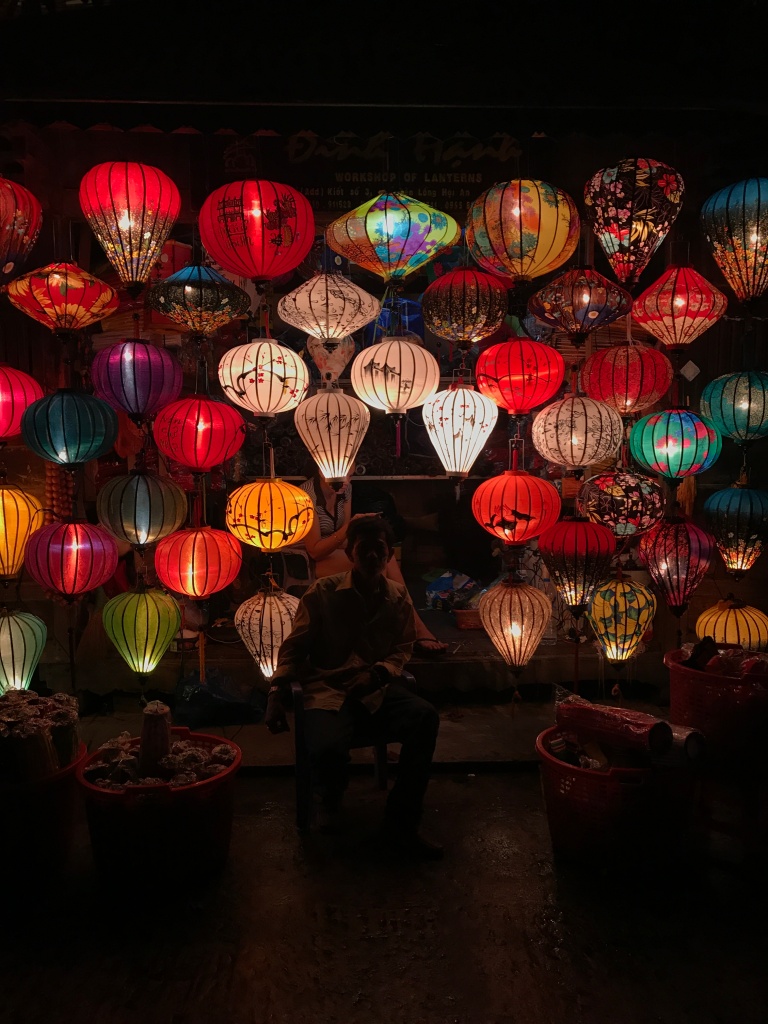 I finished my first night with a victory beer in a bar called Gold Moon near the market. In this part of town you’ll pay much more for your beer, as is the way. I paid 25,000 dong for a Saigon beer, but you’ll usually pay 10-15,000 in a local place. Nevertheless, it was a nice spot to end the day and watch the action at night, and I’m utterly charmed by the town and excited to do some exploring tomorrow.