It’s 7 am when I wake up. I don’t know why I woke up that early, but it’s nice to sit on the balcony before I head down for breakfast at about 8 am. I’m starting to think Vietnam isn’t too bad after all, and it feels much cooler than Seoul was this morning.

My plan today is to check out the historic buildings in the Old Town. There are several museums and temples to see and from which to learn about the history of Hoi An as a trading port.

To enter the Old Town, you must first buy a ticket for 120,000 dong. The money is used to maintain the upkeep of the buildings. The ticket allows you entry to any five buildings, and the ticket agents cut off one of the five tokens each time you enter a building. There are ticket booths set up at the start of the ‘walking and cycling streets’ from which cars are banned and denote the entrance to the Old Town. I have a couple of them in mind, and so I set off into the Old Town.

It’s 10 am, and now the heat is beginning to build up. It’s roughly ten minutes’ walk from my hotel to the Old Town, and within a couple of minutes I’m starting to sweat.

My first port of call is the Japanese Covered Bridge. I find a shortcut into the Old Town after buying my entrance ticket, which brings me right to the bridge. It’s the symbol of Hoi An, and one of its most famous landmarks.

It dates back to the 17th century and was erected by the Japanese community that was active in the town. You will be asked for your entrance ticket, but if you’re crossing the bridge, you don’t need to show it; it’s only required if you enter the small museum to the side of the bridge.

I wander down one of the alleyways which leads to a historic house. No ticket agent is around, so I get a free pass, although it isn’t much to look at, and I don’t take any photos. There is a little square of houses, some of which serve coffee, and there are some women doing laundry out in the courtyard. I snap a quick photo of some tablecloths hanging against the side of a building; I’m quite fascinated by the colours of the buildings here.

I come back out to the bridge and cross to the riverside. This side of the bridge (the west side) is a bit tourist-tat and there are several sellers and hawkers hanging around outside the bridge. The more high-end stuff is across the bridge on the east side. 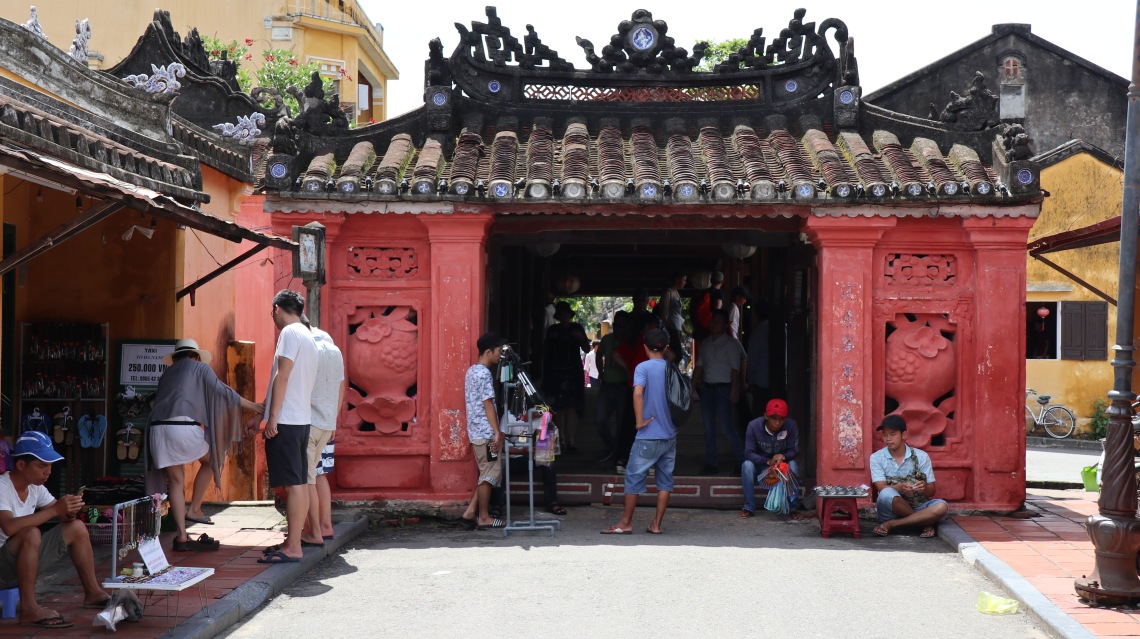 I’m slowly getting my bearings now, and I remember some of the places I passed last night. There are several tourists posing for pictures in front of the bridge. As I turn around, I see an old lady selling hand fans by the bridge. There are several such women in every street, selling all manner of items and trinkets.

By now the heat is on and I’m sweating like a beast. I stumble upon The Chef while looking up at the lanterns strung up outside. I had read about it in my research, but I couldn’t find it the last night. It’s a coffee shop on one floor and a restaurant on the roof. It overlooks one of the main streets in the town, and I read that it gets busy later in the day as people gather to watch the lights switch on. It sounded appealing, but I went to Hoi An Roastery instead.

To enter, you have to go through the book shop on the ground floor and go up the staircase in the middle of the shop. The balcony is empty, so I sit myself down. The waitress brings me an electric fan and a glass of water, noticing how hot I look. I’m slightly embarrassed, and I envy the people walking freely in the sunshine that are not sunburned or sweaty, wishing I wasn’t affected so much by the heat. 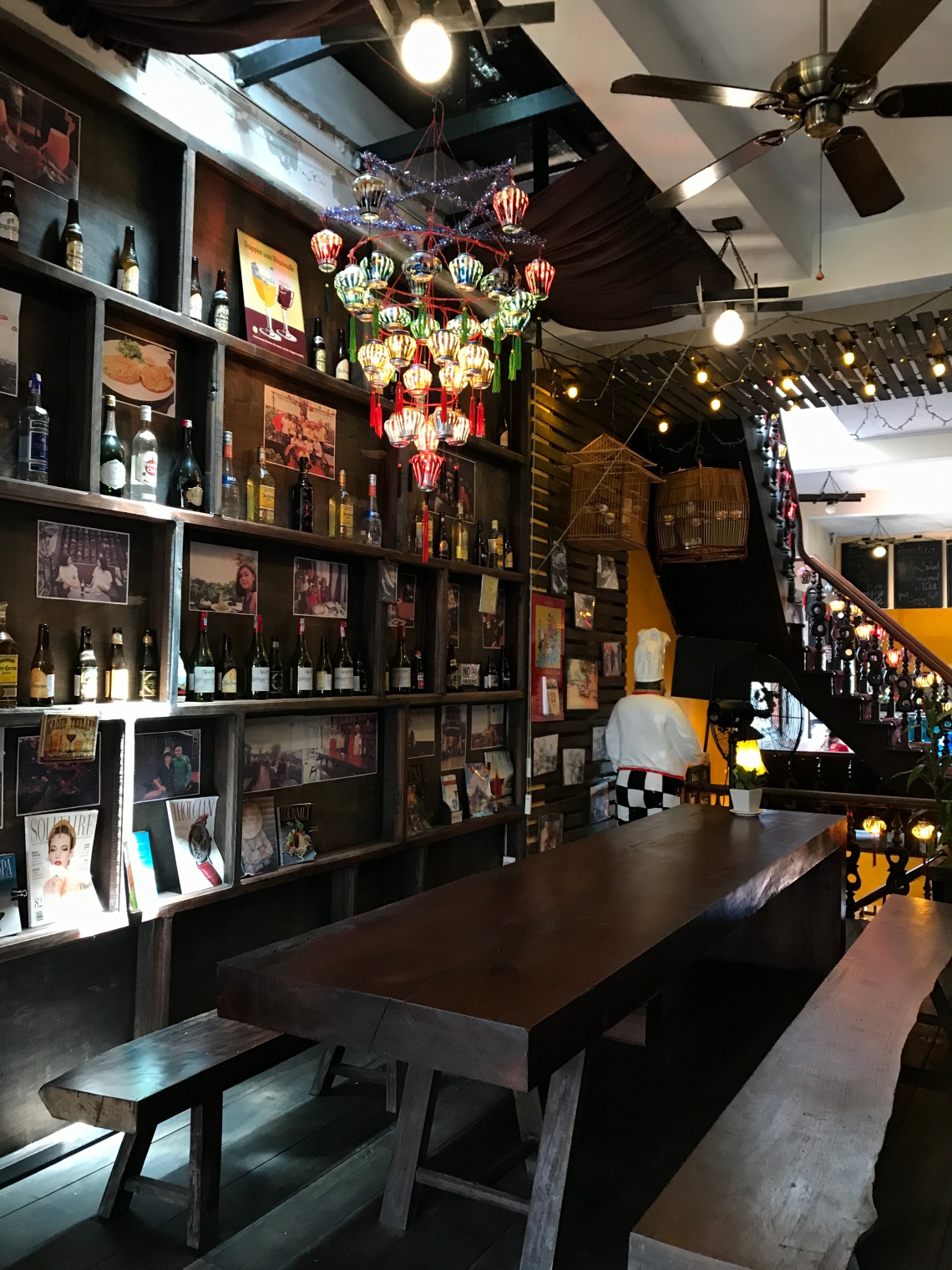 Interior of The Chef

I spend a pleasant hour alone on the balcony, trying to cool down and watching life on the streets of the town and practising using the controls on my camera. There’s a great view of the rooftops, the coffee is great (all Vietnamese coffee is great) and the lanterns are extremely pretty. 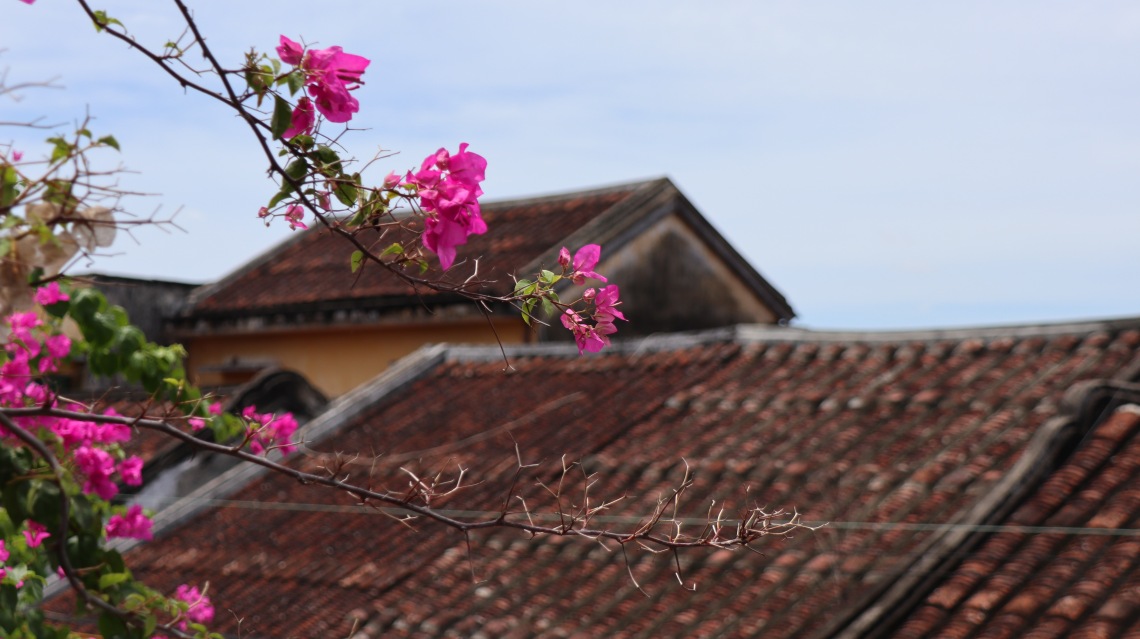 Back on the streets, I buy a notebook for 25,000 dong from an old lady selling them on the street. She sees my camera and tells me to take a photo. It seems all the vendors are used to tourists asking them for photos, but it seems only right to do it when you’ve bought something from them. I take one because she asked, but I snap a picture from above on my phone as she’s sorting out my change, which I much prefer. 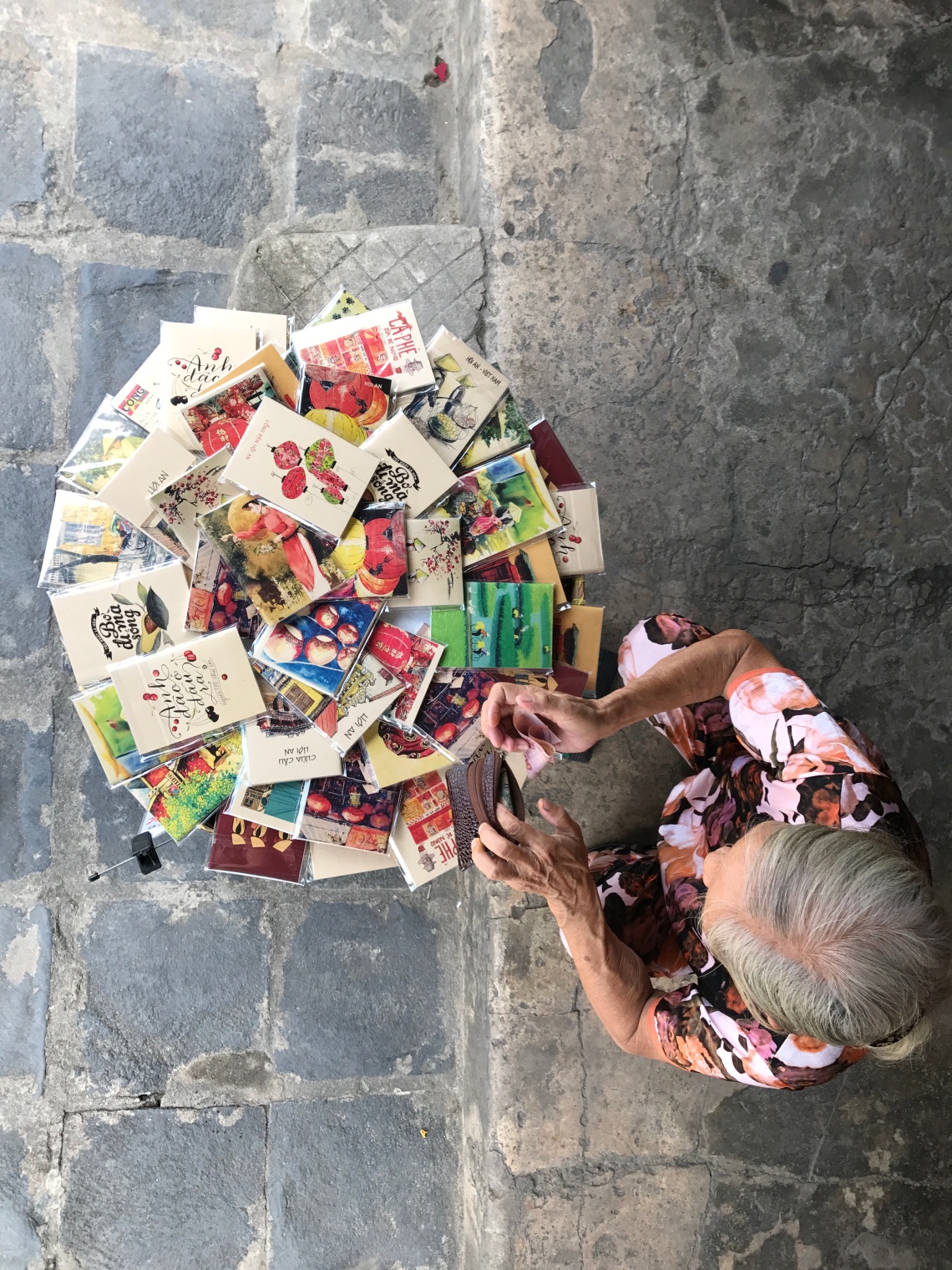 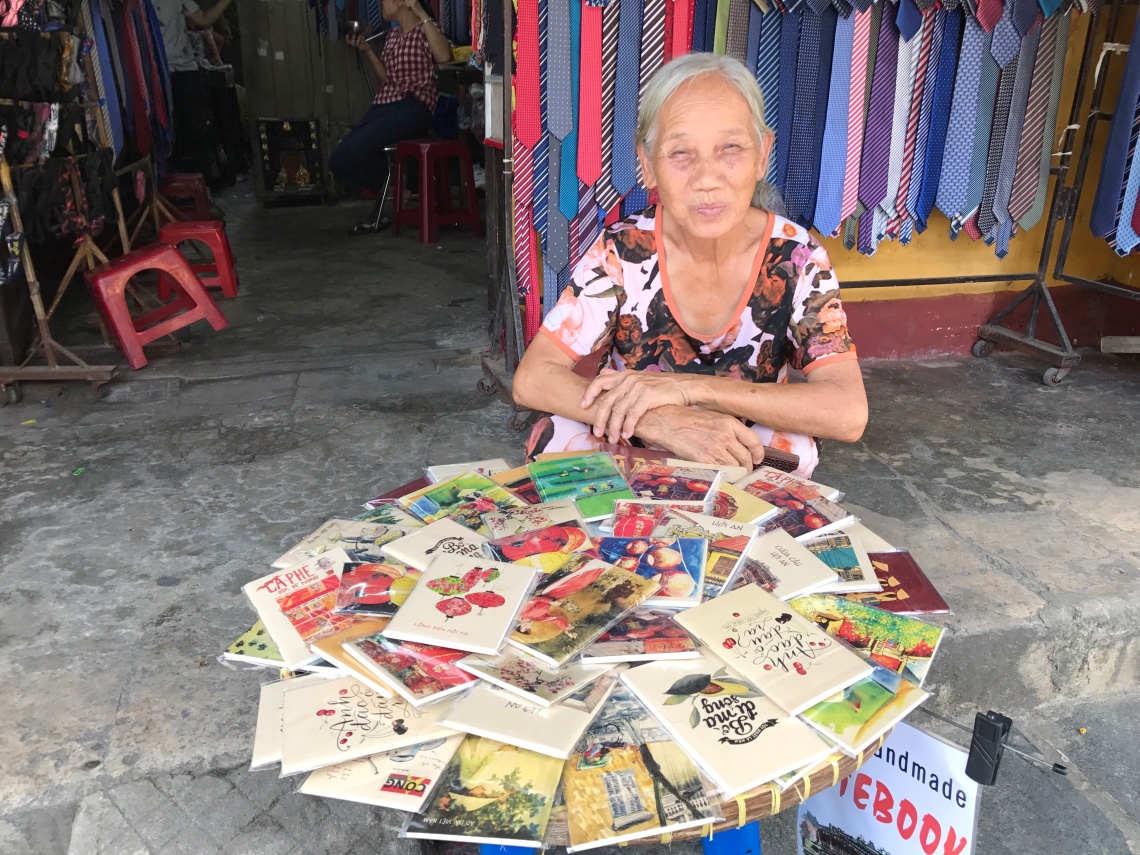 Next it’s the Chinese Assembly Hall. It’s pretty, and apparently it’s one of Hoi An’s most spectacular architectural treasures, but it’s nothing I haven’t seen before in China and other parts of Vietnam. There’s not really any information about what it is or its history, and I spend about ten minutes wandering around and trying to get an interesting shot of the incense coils. The same goes for Phuoc Kien, another historic house. What is notable here is that the ticket agent corrals me into buying a ‘lucky coin’ which is based on my Chinese zodiac animal (1980, year of the monkey). It costs me 20,000 dong. 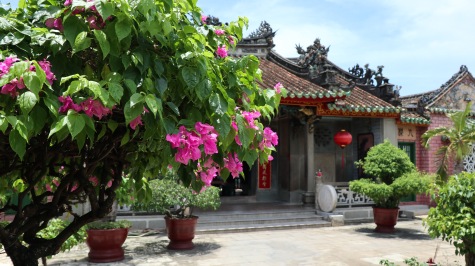 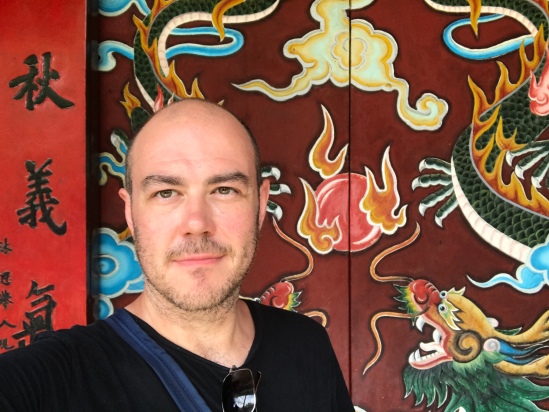 I decide I want bahn mi for lunch. I’m close to the market now, and I remember seeing a street vendor there last night. However, she’s nowhere to be seen, so I settle for a cafe across the street and watch the market women going about their business. I’m joined by a furry street friend, and as I get my camera out and take a picture, a lady selling fruit asks me to take a photo. I don’t really want to, cos I know and I have read that this is a way to make you spend money on their wares, but she is insistent and then annoyed when I don’t want her bananas. 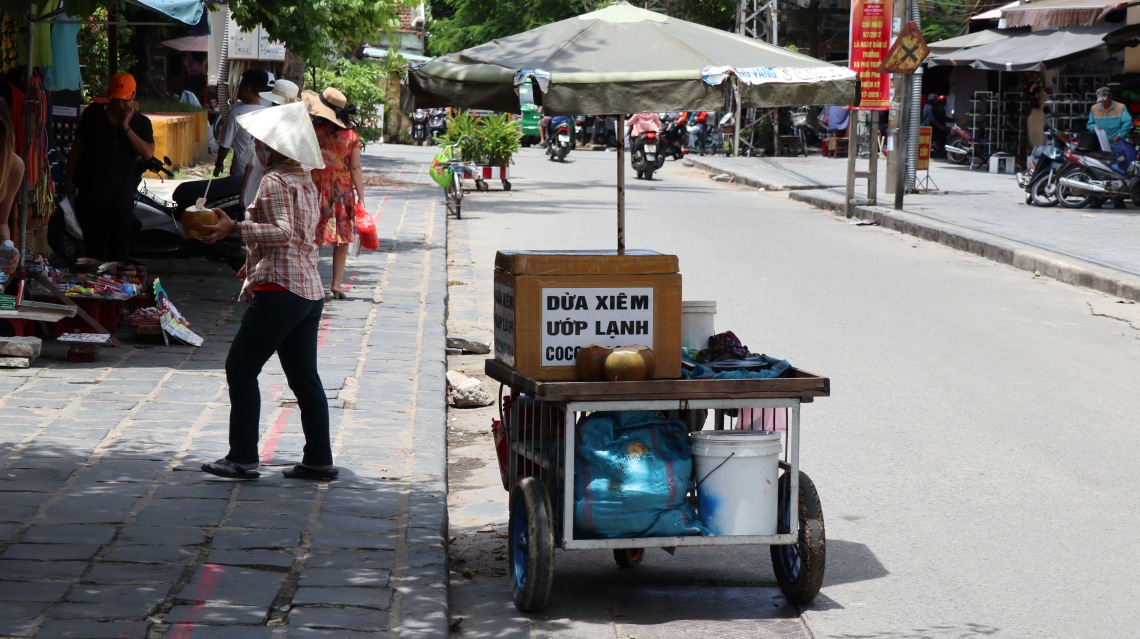 I wander back to the hotel and have a swim in the pool. I pass through the tourist tat area to the east of the Japanese covered bridge, watching life on the streets down there.

Tonight, the town is very different. I wander back in around 5 pm, as I want to see the lights come on and look across the river in the daylight. Whereas last night wasn’t so crowded, tonight it is thronged – presumably it was quieter last night due to the rain. There are thousands of tourists everywhere, tens of boats in the river and innumerable cyclos carrying Chinese tourists through the narrow streets. 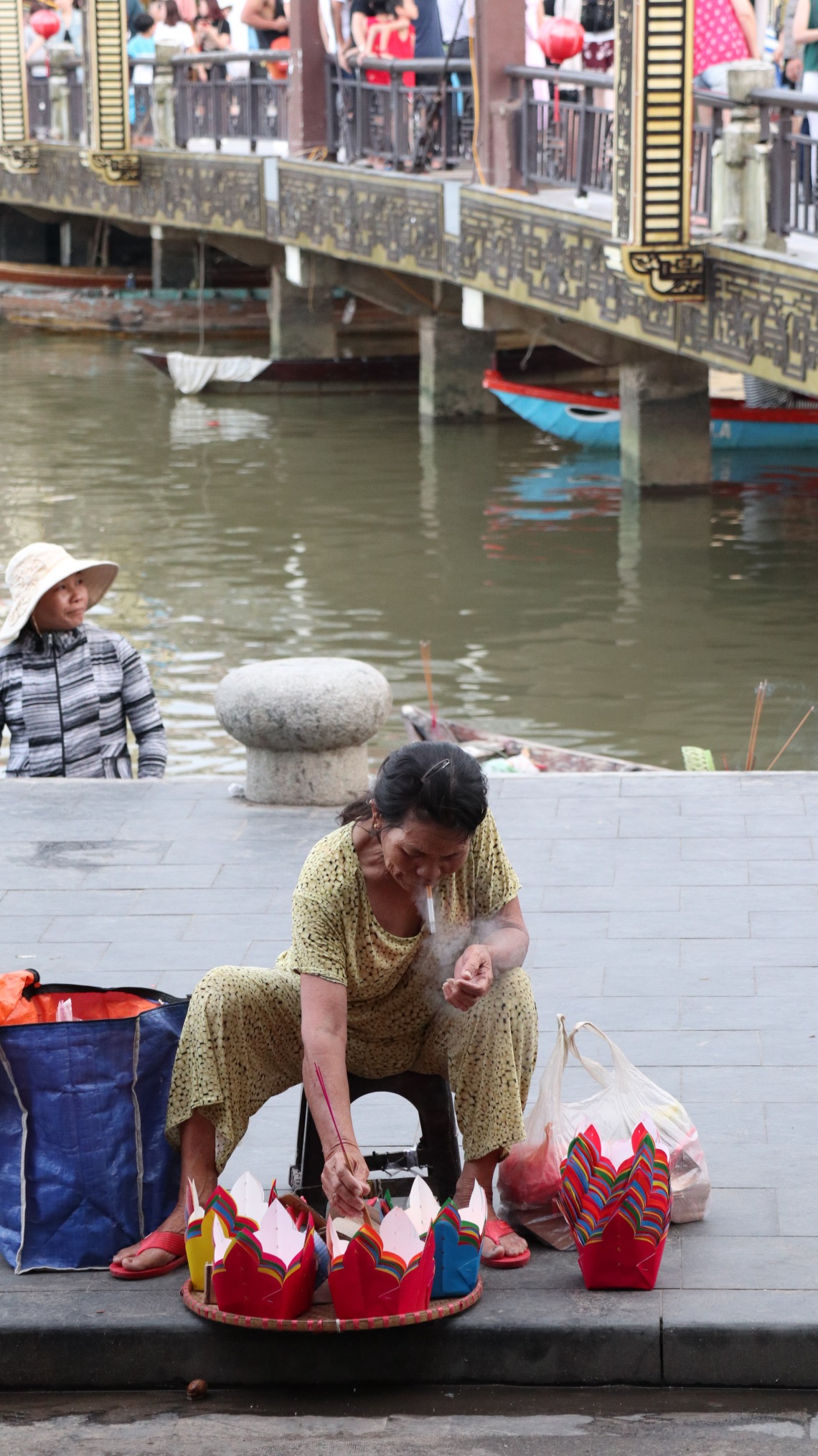 An old man does the same thing as the woman in the market – he strokes his beard and points at my camera, wanting me to take his picture. Again, I don’t really want to, so I do it quickly but he insists on checking the picture. He seems to be happy with it, but then is unhappy when I don’t want the boat ride he’s trying to get me to go on. 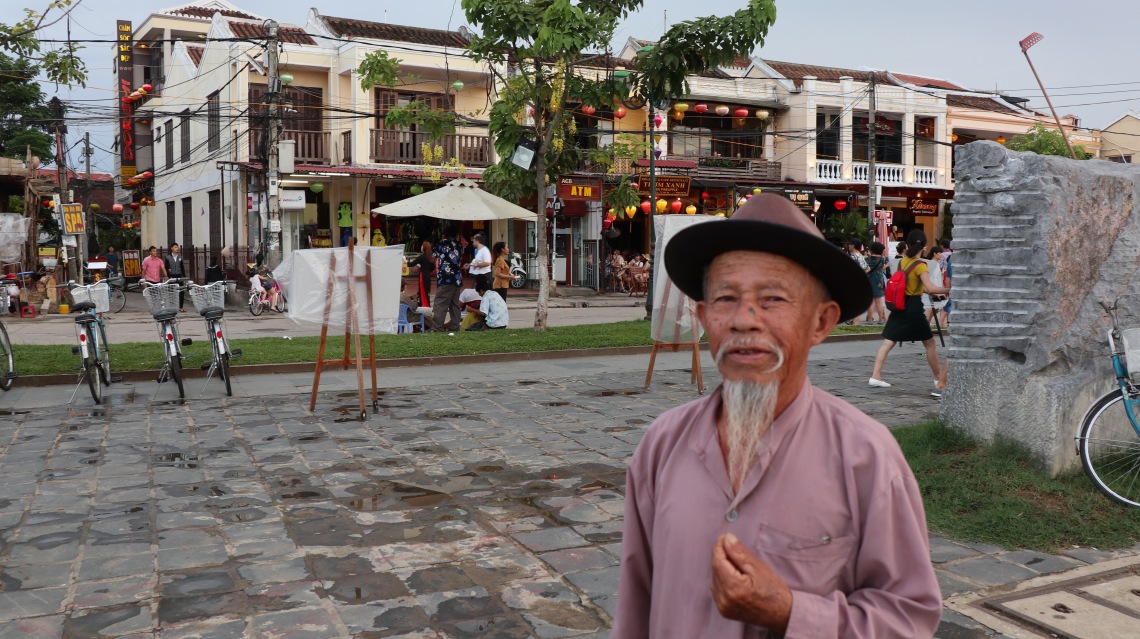 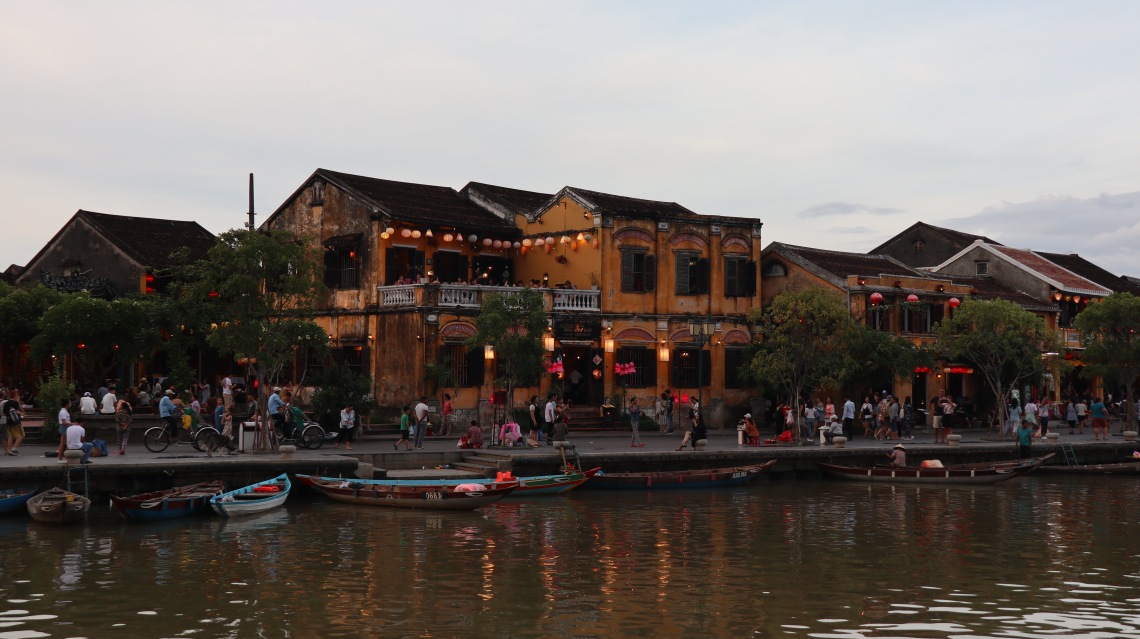 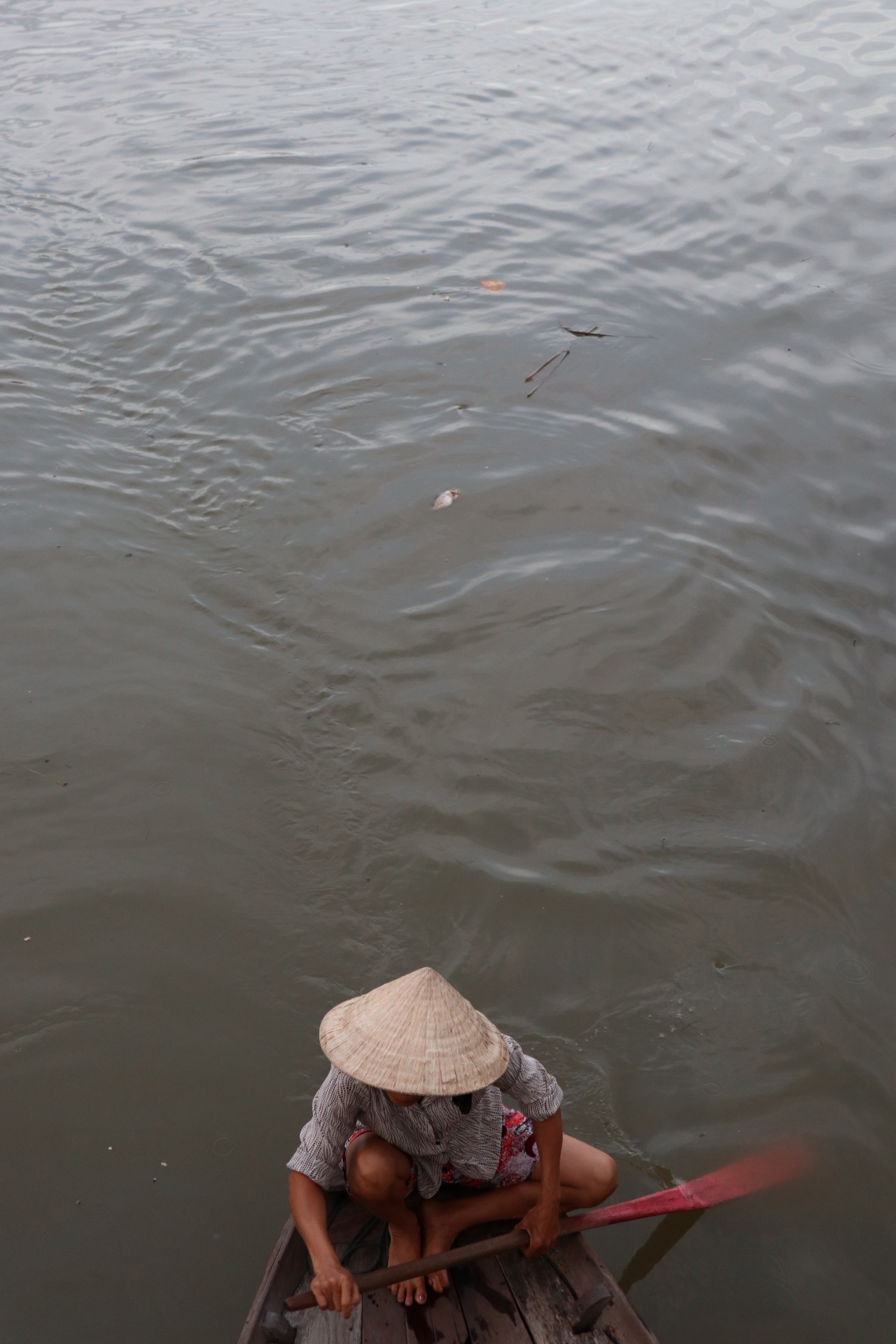 I eat again in the market (this time another Hoi An and Hue speciality – white rose dumplings). I had thought about trying Miss Ly’s cafe, but at 6 pm it’s booked up for the rest of the night and I’m advised to try in the daytime. It’s conveniently located across from the Coleurs d’Asie gallery, which is my real reason for wanting to go there.

Rehahn is a French photographer who has relocated and made a name for himself taking portraits of the people of Indochina. His most famous portraits are of the Vietnamese, and there is an open exhibition of his photos along the south bank of the river. In January this year he opened a small gallery in the town, which sells his photos, books and postcards. 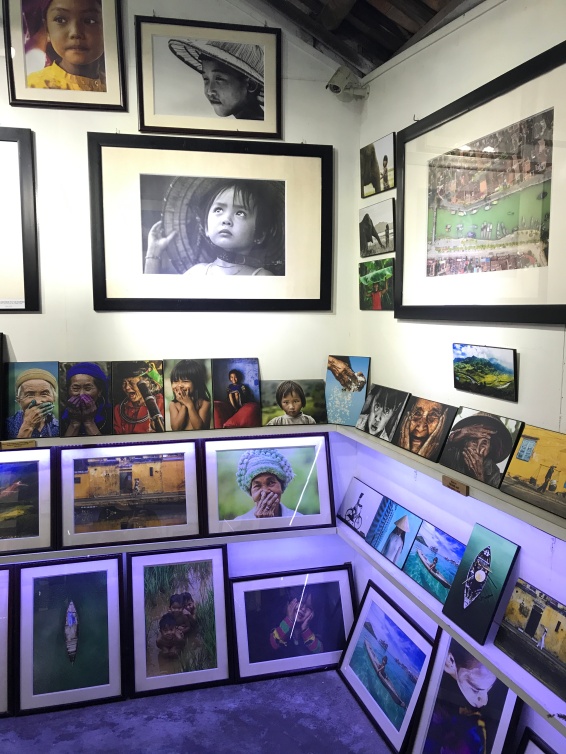 I’ve heard tell that he is sometimes present in the gallery, and that sometimes his most famous subject, the ‘Laughing Woman’, can be found nearby. I don’t expect to see either them, of course, but his work is another recommendation that I wanted to check out. I buy five of his limited edition postcards (30,000 dong each), which the shop attendant tells me are limited to 500 copies, and then, following another recommendation, set off for the Enjoy restaurant, which first displayed his work in the town, to try their ice cream.

It’s a struggle getting over the bridge due to the volume of people. I stop along the way to try and get some photos of the town at night, but I suck at night photography. 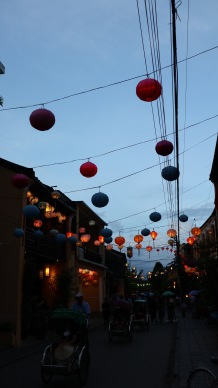 I leave the melee behind and find myself walking to the west side of the town, past the night market and the backpacker bars and the open air performances of traditional Vietnamese folk games. I come to the next bridge and find an interesting part of the town. While the Old Town and night market are thronged with tourists, the locals seem to stay away from that area. Perhaps it’s the tourist prices or the sheer number of people milling around. They seem content to leave the Old Town to the tourists and hang out in their own area, sitting on tiny plastic chairs and drinking 5,000 dong glasses of beer with each other. It seems a shame, and I wonder if they feel that they’ve been displaced from their own town in the name of tourism.

I make my way back to the Japanese Covered Bridge on the other side of the river, along a street I haven’t been along yet. I’m intrigued by a shop just next to it, called Ha Ha. I bought several pieces of Vietnamese propaganda art in Hanoi three years ago, and earlier this year finally got them out and framed them for my new apartment. This shop is full of items like book bookmarks, cards, notebooks and posters in a similar style. A Kiwi couple ask if the man in the shop is the artist, and he says yes. When they’ve gone, he comes over to me and we chat for a while. I’m wondering first of all if I should spend the money on things so early into my trip, and wondering if I can keep it intact for the rest of the trip. 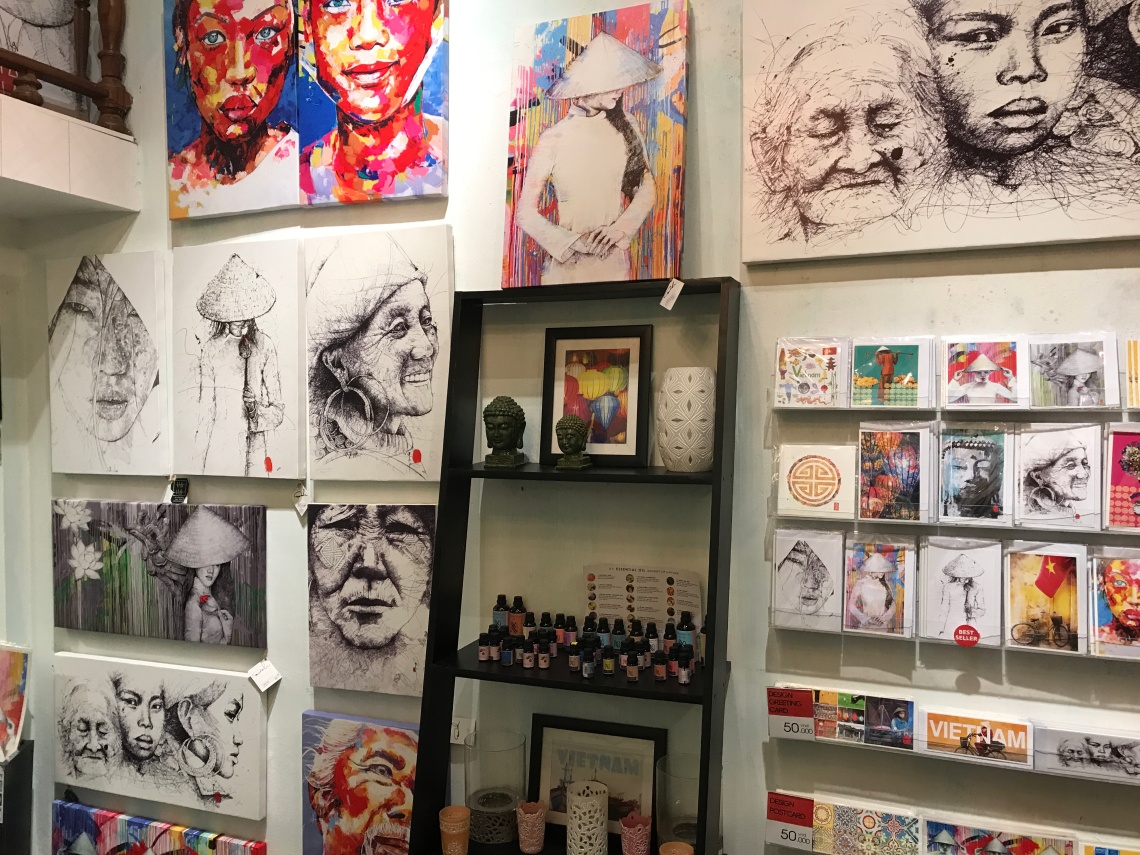 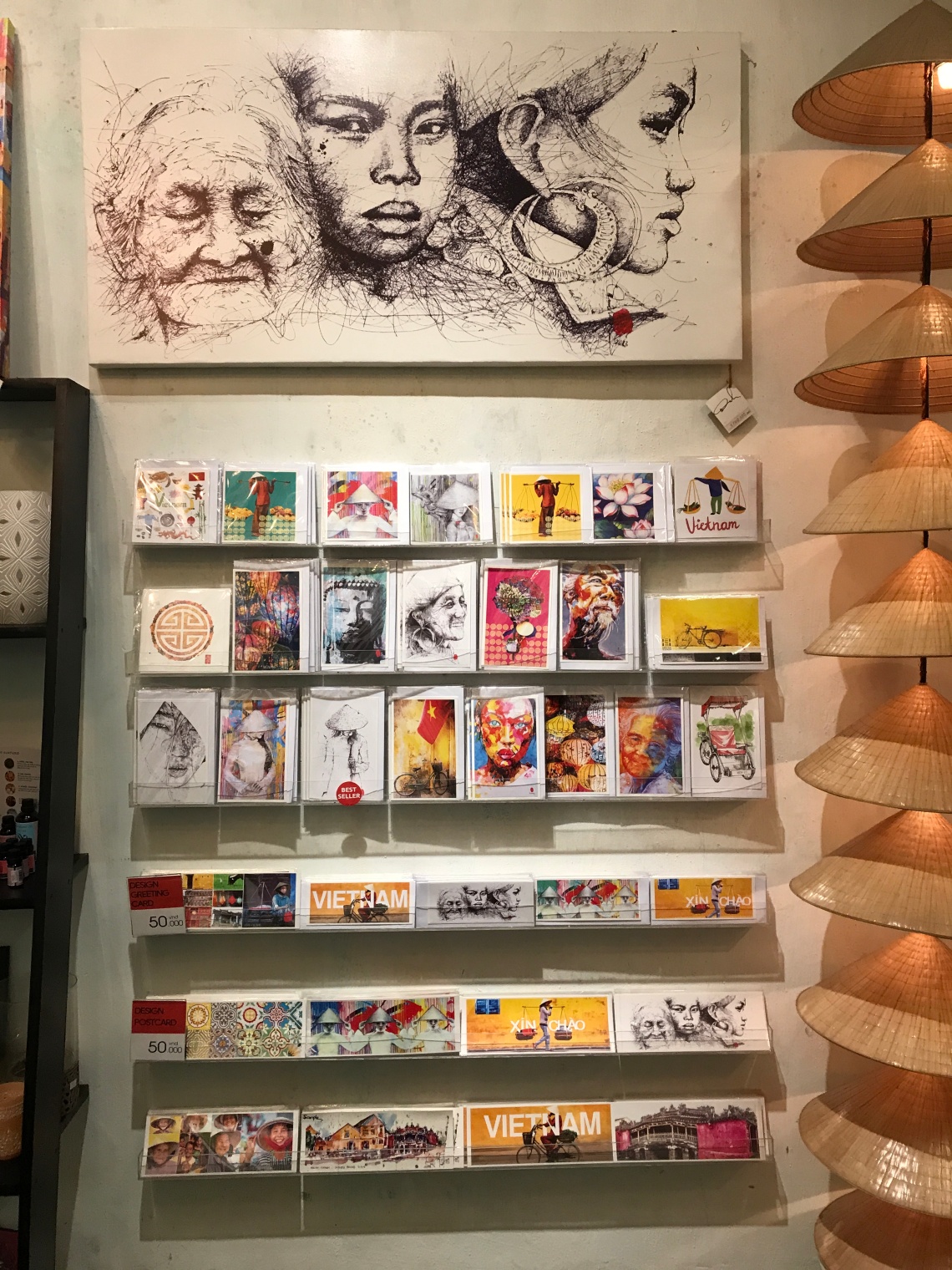 Then I ask him about how the locals feel about the number of tourists in Hoi An. On the one hand, he says, they don’t have a problem. A rising tide lifts all boats, as they say, and the money and jobs from the tourism boom are bringing more wealth into the town. Apartment blocks are being built and people are living comfortably. That allays my worries a little.

He tells me he struggled at first, however, when opening his shop because western restaurateurs and bar owners who have more money are able to pay rent more easily than locals to get a spot in the town, but he’s doing okay now. I hope it continues for him.

I don’t buy his things yet, but I’ll be back to do so.

I have recently returned to the UK after many years of living and working as a university lecturer in Seoul, South Korea. I took eight months off to travel the world in 2018. I'm now working freelance as a proofreader, copy editor and writer for my own company, Clean Page Editing Ltd. View all posts by Daniel Deacon