A cooler day. It’s grey and overcast in the morning, but not so hot, which is very nice. I arrange with the hotel receptionist to get a car to take us to My Son sanctuary. There are many tours there, and they are very cheap, at about $5 per person. However, it’s the typical tourist thing of spending a couple of hours visiting markets and restaurants along the way where the tour companies get kickbacks and it doesn’t appeal. Since they all depart in the morning to take advantage of the cooler hours, I arrange for the car at 1 pm. We’ll get there around 2 pm as the tours leave and the site should be quieter. It promises to be a cooler day, so there’s no need to worry about being out in the open in the beating sunshine.

It takes about an hour to get there. My Son (I’m told that it is pronounced ‘mee sern’) is often compared to Angkor Wat, as the markings and temples are built in the same style, though it is of a much smaller scale. It was built by the Champa kings between the 4th and 9th centuries, but abandoned once the Champas became integrated into Vietnamese society sometime around the 12th century. It was rediscovered in 1885.

During the American War, as it is called here, the Viet Cong held My Son as repository, and as such the site suffered a lot of damage when the Americans bombed it. Most of the temples are now in ruins, and many were completely obliterated, and bomb craters are still visible around the ground.

As we enter, we see several people leaving who are drenched in sweat. As we being to walk through the complex, we begin to feel why. Although it is cooler today – around 28 degrees compared to 34 the previous few days – it is incredibly humid on the site. Even after a couple of hundred metres the sweat begins to drip down my back, and by the time we get to the first set of ruins I’m just about drenched. I did bring a towel from the hotel, but even that gets drenched and is not of much use.

The ruins are interesting, but as someone who has been to Angkor Wat twice, they are indeed reminiscent of that complex, so they didn’t wow me as much. The site sits in a valley in a lush jungle and the scenery around the complex is stunning. It is a small site – I set my Apple Watch to an outdoor walk to trek how far we walk around – and we are done in just over an hour (it was 2.2 km from the entrance and back again). There is not much information at the ruins to tell you what you are looking at, but there is a small museum at the entrance to the site which explains the symbols and history of the buildings. It’s worth taking ten minutes to look around and get some information on what you will see. 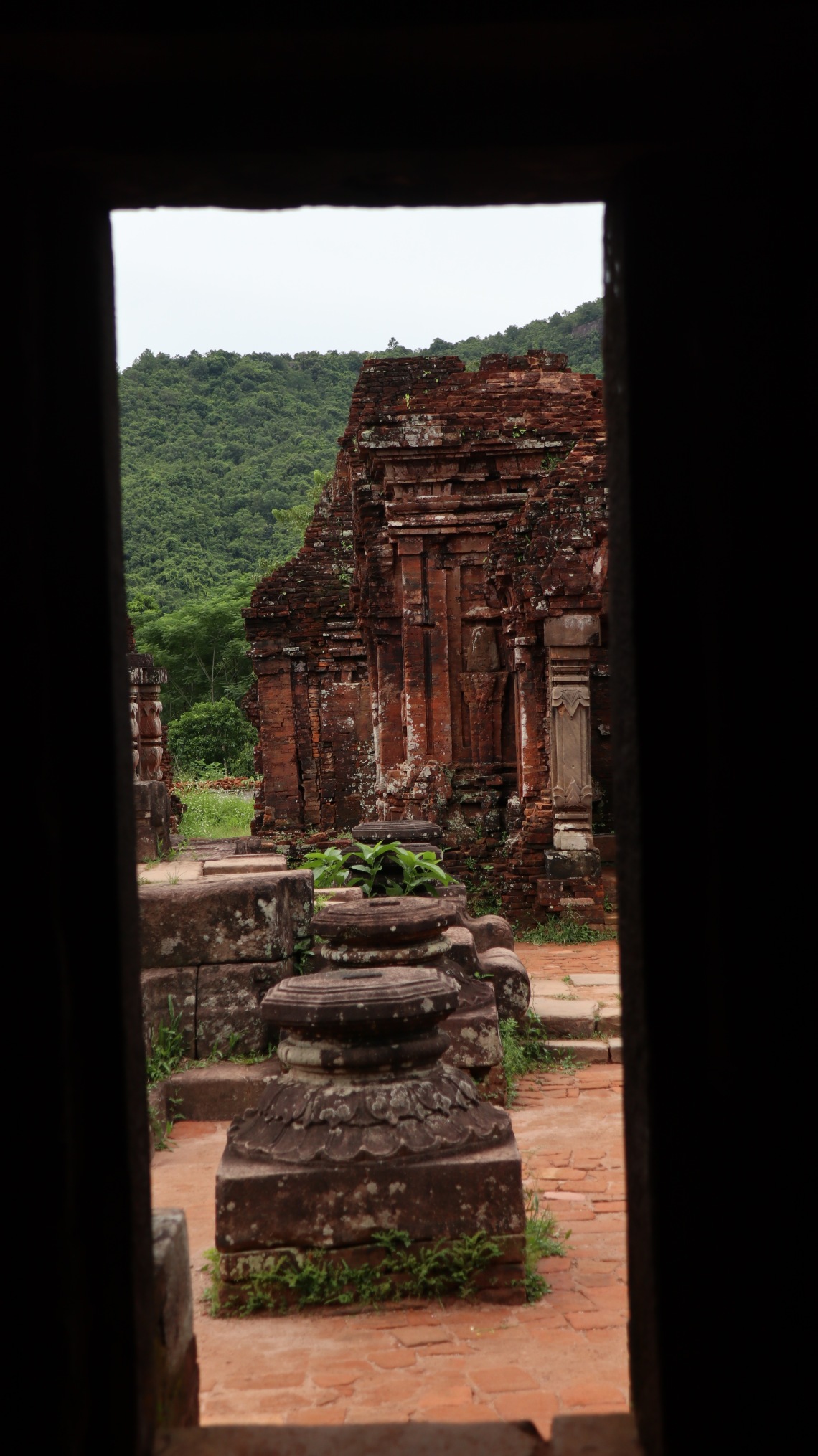 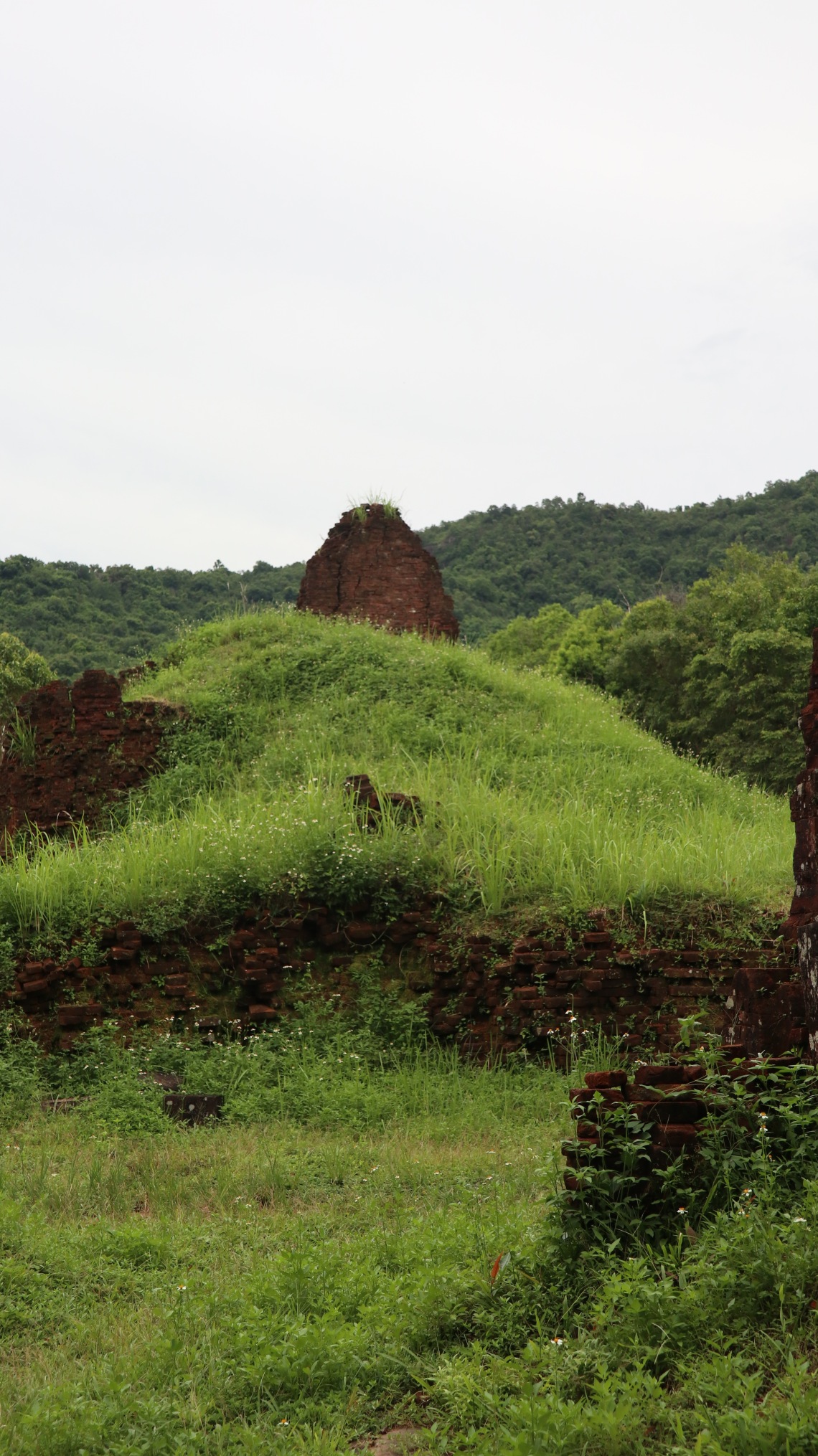 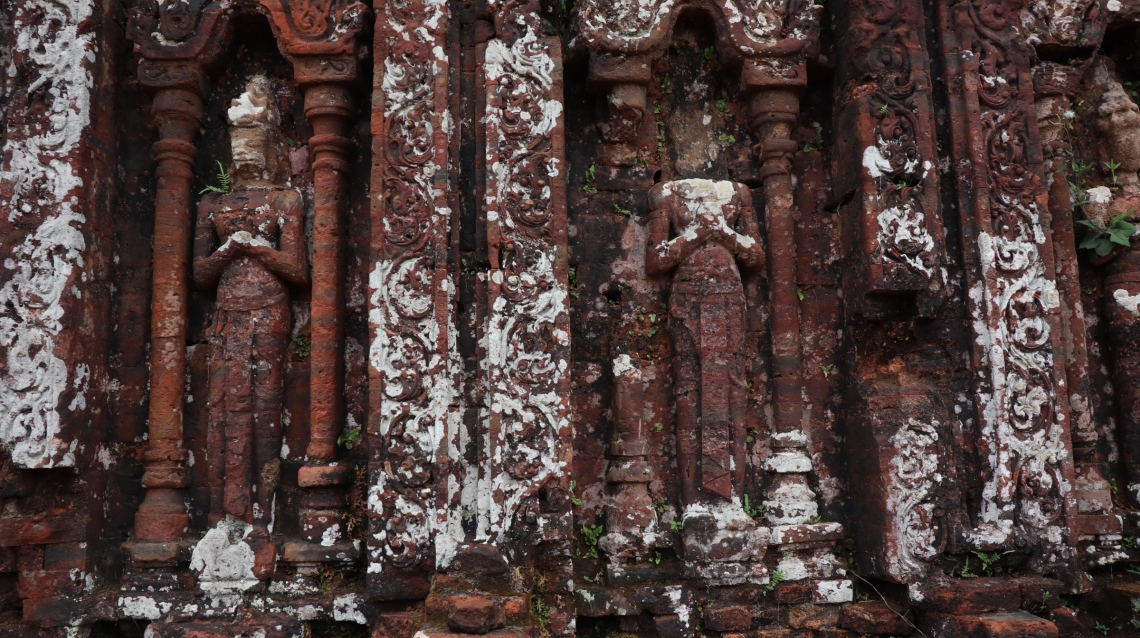 That towel was useless… 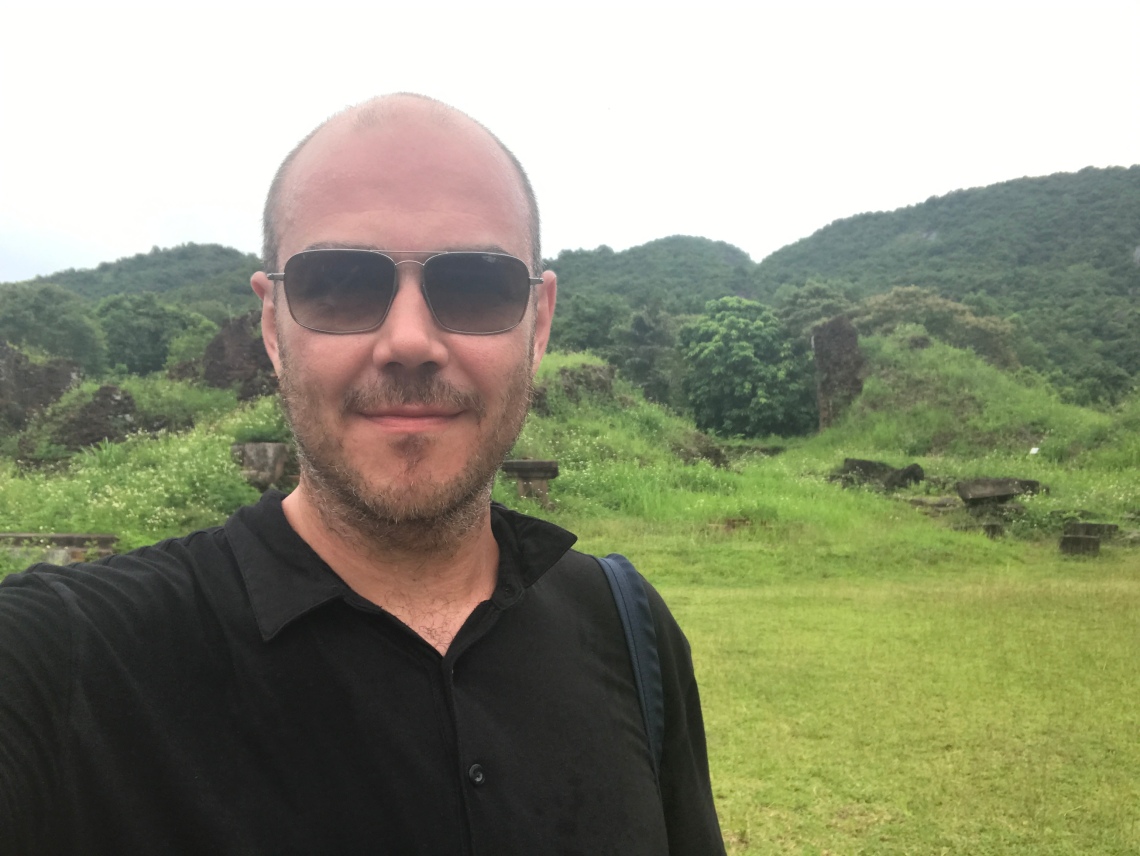 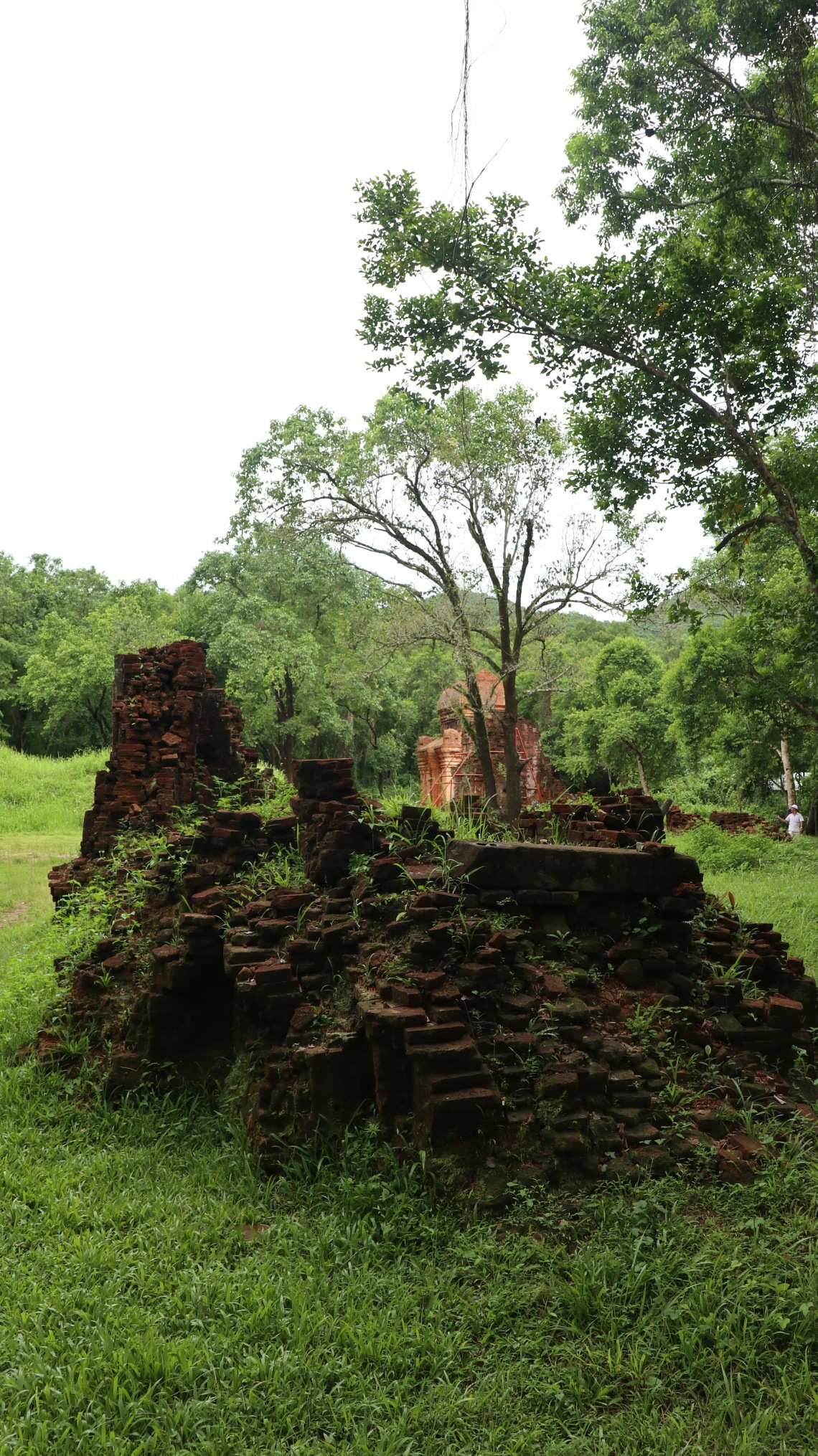 Not sure if I’m supposed to be doing that… 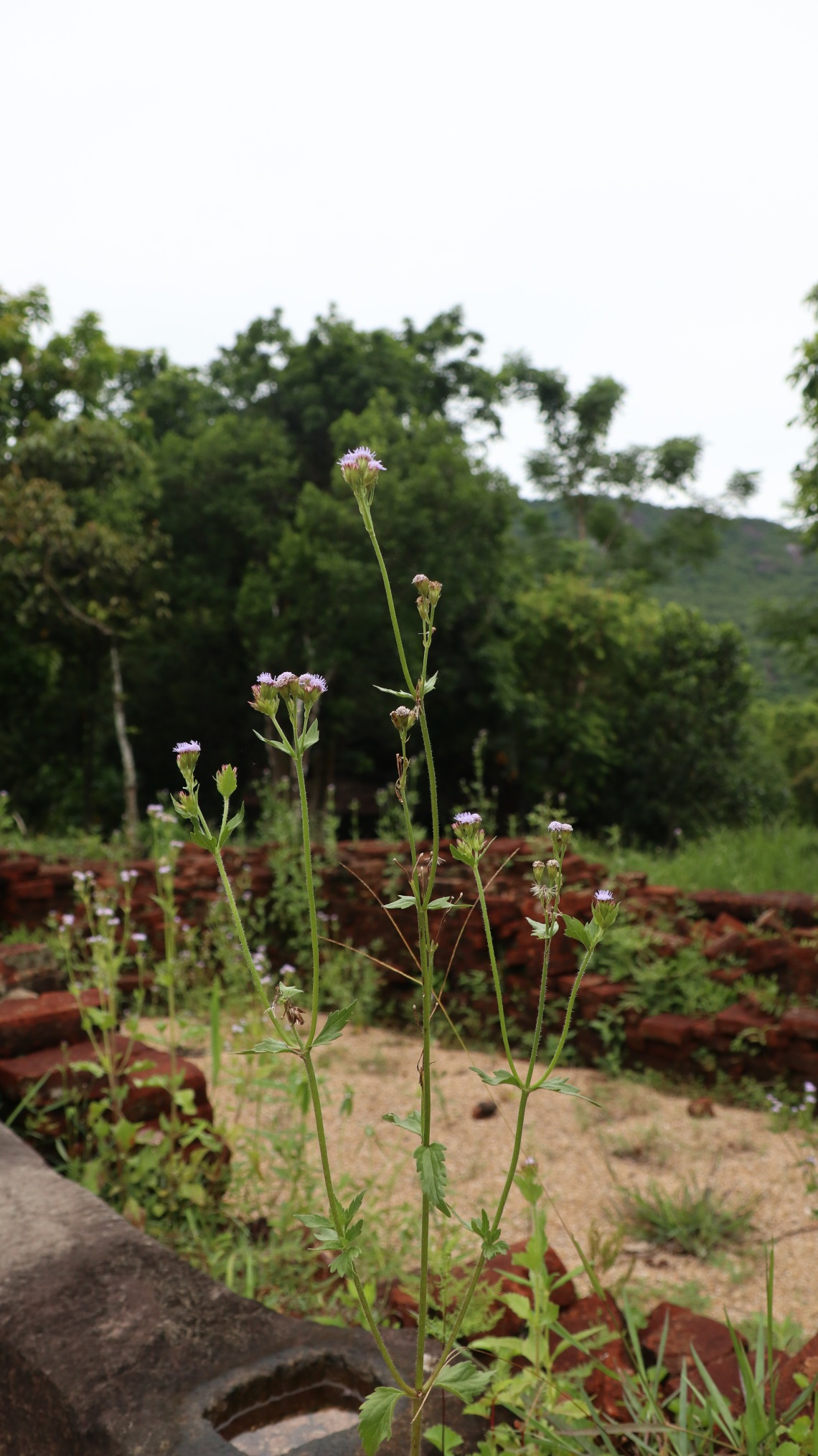 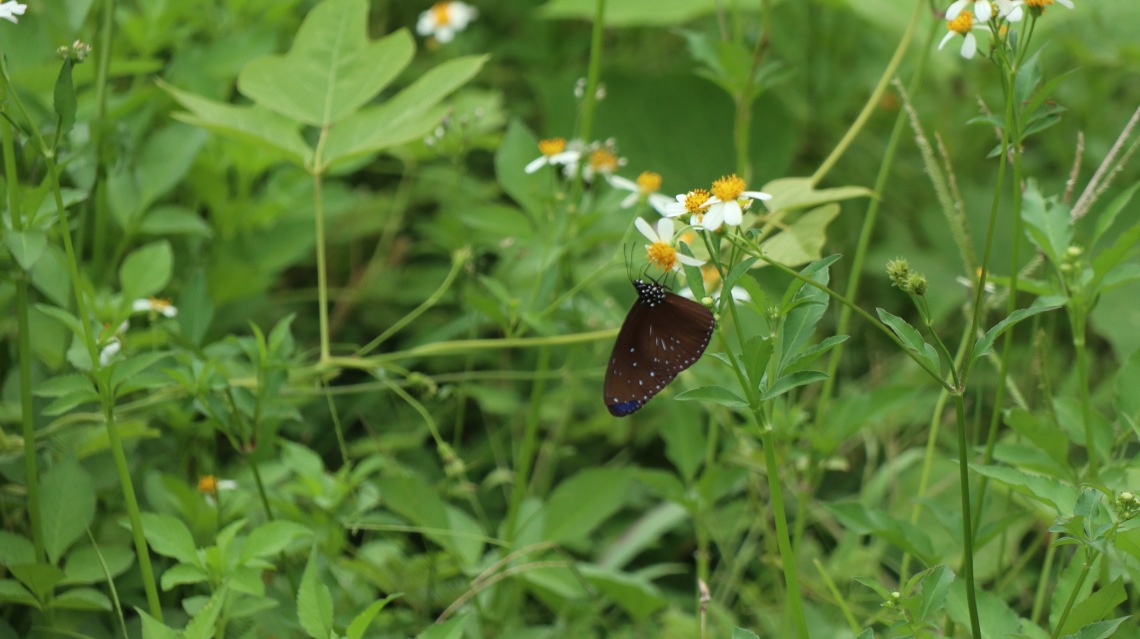 Close encounters of the Korean kind.

We head back to the car. I’ve been keeping track of the time because we’ve booked a sunset dinner cruise on the river which departs at 5 pm. It’s just before 4 pm when we leave, and it should take an hour, although no cars are allowed into the Old Town and it will be a five minute walk from where we get dropped off to where we board the boat. I’m not worried about the time, but as it gets close to five and we’re not quite back in the town, we start to wonder if we can ask the driver to call and say we’re on our way, since we’re only using phones on Wi-Fi, though his English is minimal and our Vietnamese is non-existant.

The clock hits five. We’re close to the town. We make it through crossroads near the quay, but the driver has stopped on the complete other side of the town from which I’ve asked him to drop us. I try to make him understand that we want to go to the other bridge, jabbing at the screenshot of Google Maps I have taken on my phone, but he insists we walk along the bank. Oh well, I think, if we don’t make it, at least we haven’t paid for anything yet.
|
We trot along the river front. It’s actually a bit quicker than I remember to get to the Japanese Covered Bridge in the centre of the town, and from there it’s just a few hundred metres to where the boat company’s office is. As we pace along we’re trying to see if we can get on the town’s free Wi-Fi to Skype call and let them know we’re coming, but my phone won’t connect and I can’t get the boat company’s number. As we pass the Japanese bridge and come towards the docks, I see our boat – the company is called Cinnamon Cruises and the boat is a double decker towering about all the river boats. We put the phones away and pick up the pace. Then we see it pulling back out from the dock.

I begin to run. As I do so, my water bottle crashes to the floor from my open bag. People begin yelling after me. I turn and wave back that it’s okay and carry on. I’ve got about 200 metres to go and I feel very Anneka Rice in Treasure Hunt. More yelling after me. I don’t care, it’s only a water bottle. It’s 5.15 pm. The boat is about 20 metres out into the water. We wave and we yell at the people on the boat, holding up three fingers to signify we are the three that haven’t turned up yet.

They wave back and bring the boat back to the quay. There are three parties sitting out on the stern, and we see our table laid out. As we’re panting and catching our breath, the man who has been yelling at me approaches. He’s holding my water bottle, my hat and my towel, all of which have fallen out as I ran along the quay. I thank him. He asks for money. I grab my things and sheepishly board the boat, apologising to the other diners for delaying them. At least we’ve got a conversation starter as we explain what happened with the driver. 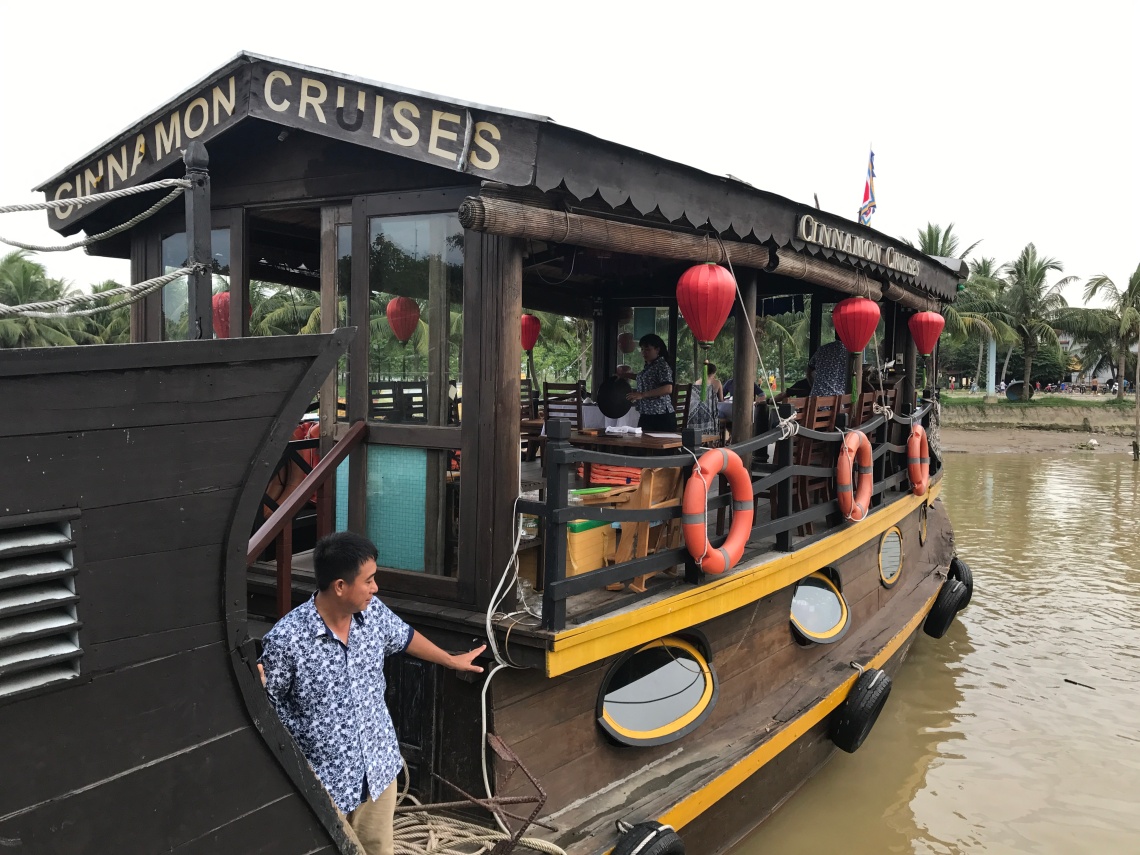 Bringing the boat back to the quay for us

We perhaps needn’t have worried about the delay. It’s been hot and dry for the last few days, and the boat has trouble leaving the quay. The water level in the river is low, and the waiter explains that the channel out into the river is narrow and there are a large number of smaller boats coming through, forcing us to wait our turn. We go back and forth between the mooring and the open water near the bridge. We’re thankful for the delay as the sun breaks through the clouds over the Old Town and lights up the mountains in the distance, a lovely sight that we would have missed if we had cruised straight out into the river. 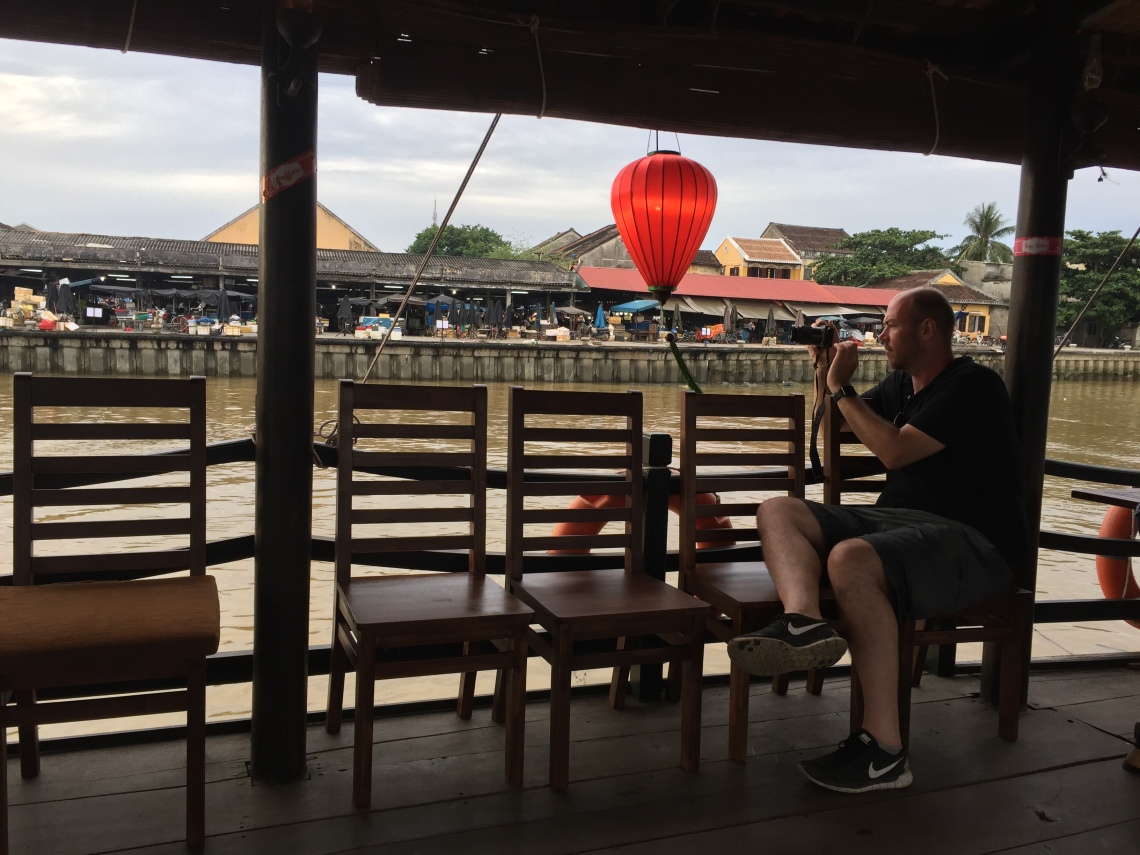 We still have trouble getting out into the channel. The boat banks on the silt banks below the water and the captain pushes hard to get us off and turns us around. We come back for another attempt. Stuck again. This time he perseveres and we dislodge from the bank and head out into the river.

It’s a very pleasant cruise, and the cool wind is welcome as we cruise along the river. After dinner, the lights are dimmed and a birthday cake appears for a woman dining with her family. Catherine wheels and roman candles are set off on the deck as Happy Birthday is played. In a lovely touch, she shares the cake with everyone on the boat.

Then it’s time for lanterns. I haven’t done one yet, but everyone gets one and we each set them into the river and make our wishes before heading back to the Old Town. It should have been a two-hour cruise, but we are on the boat for three hours. 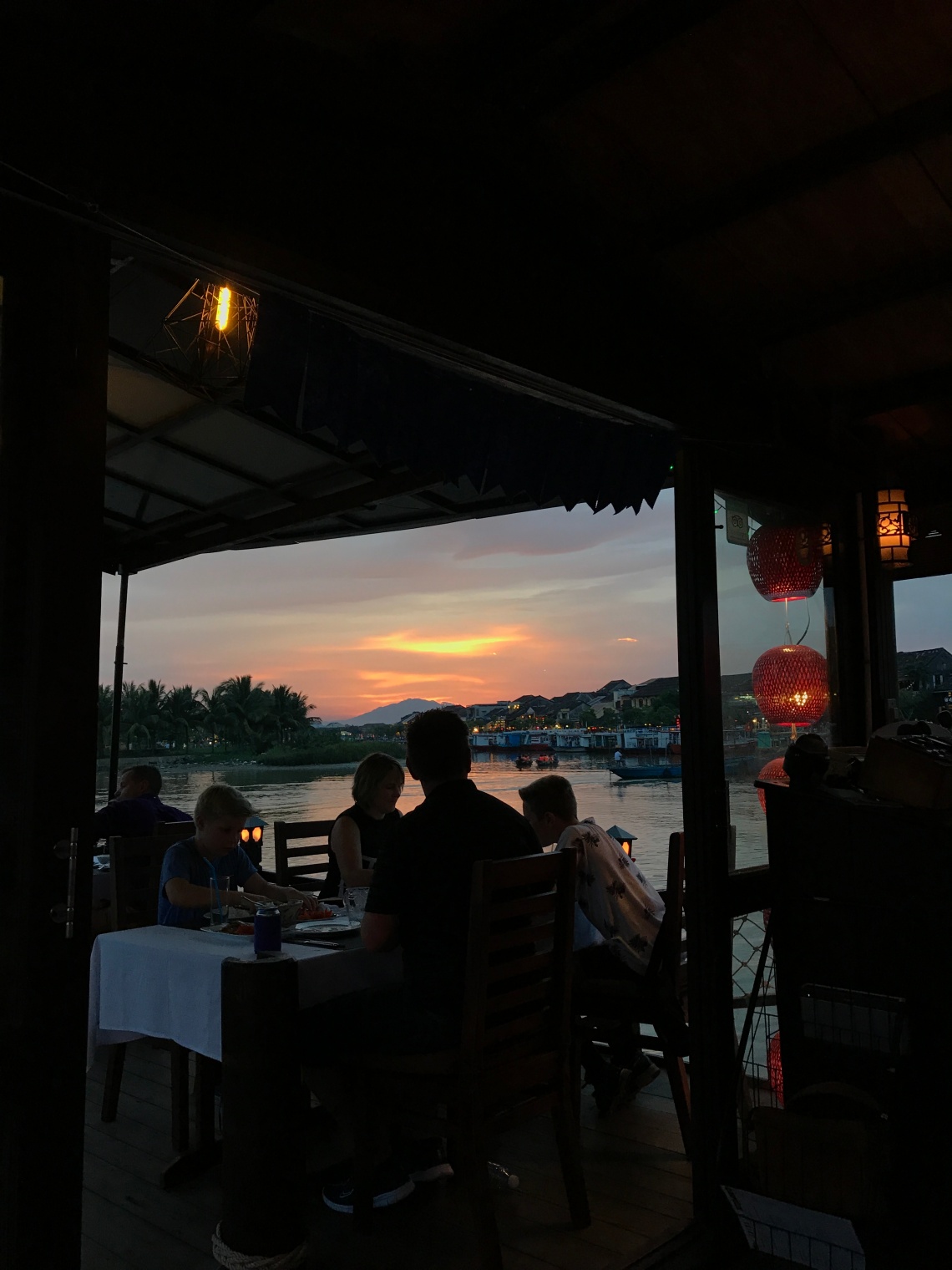 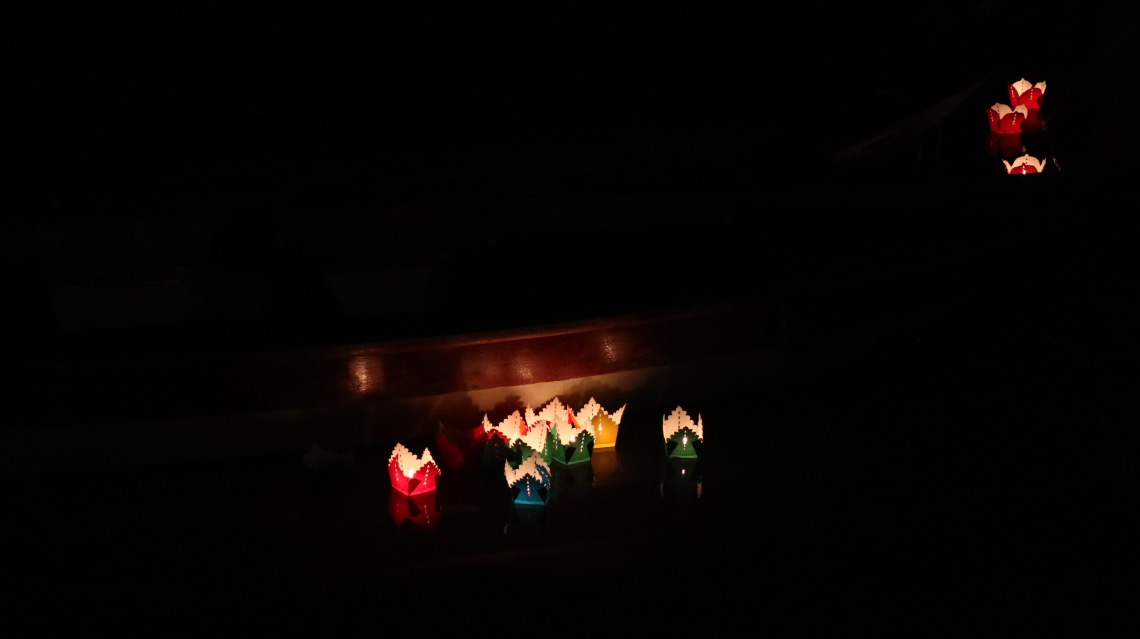 We head over to the night market. It’s crowded and rowdy. We are lured into a spa and get foot massages. Much merriment is caused by the size of my feet. The masseuse that gets lumped with me has a sour look on her face after it’s pointed out, and after about five minutes she gets up and someone else comes and takes over. It costs only about £4, but it’s quite nice, though not the best I ever had (in Taipei my first ever massage had me so relaxed I fell asleep in the chair). I haven’t had a foot massage since I was in Hong Kong four years ago. I might well get them more often. 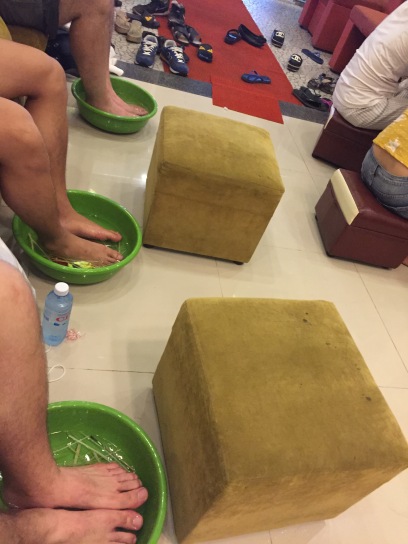 Bryan and Ki Ya depart as it looks like rain. I take another hour to wander around the town and take in the lights, taking in the atmosphere one last time since it’s my final night here.

I head back to the art shop and I buy the pictures and book I had my eye on. The artist isn’t there tonight, but the shop assistant is just as nice and friendly. I head back to the hotel to pack. Tomorrow I’m biking over the Hai Van pass to Hue, and so my time in Hoi An has come to an end. 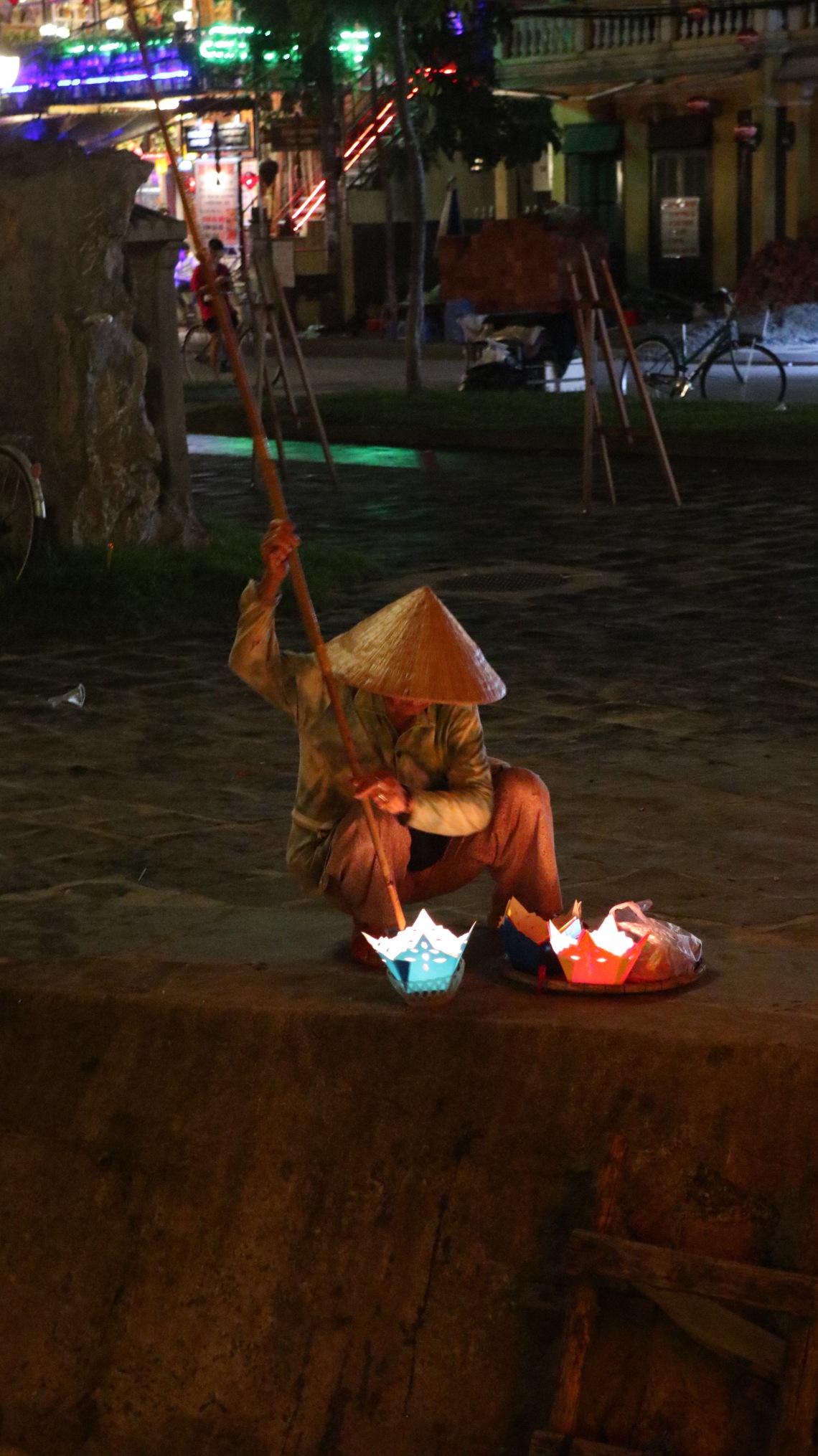 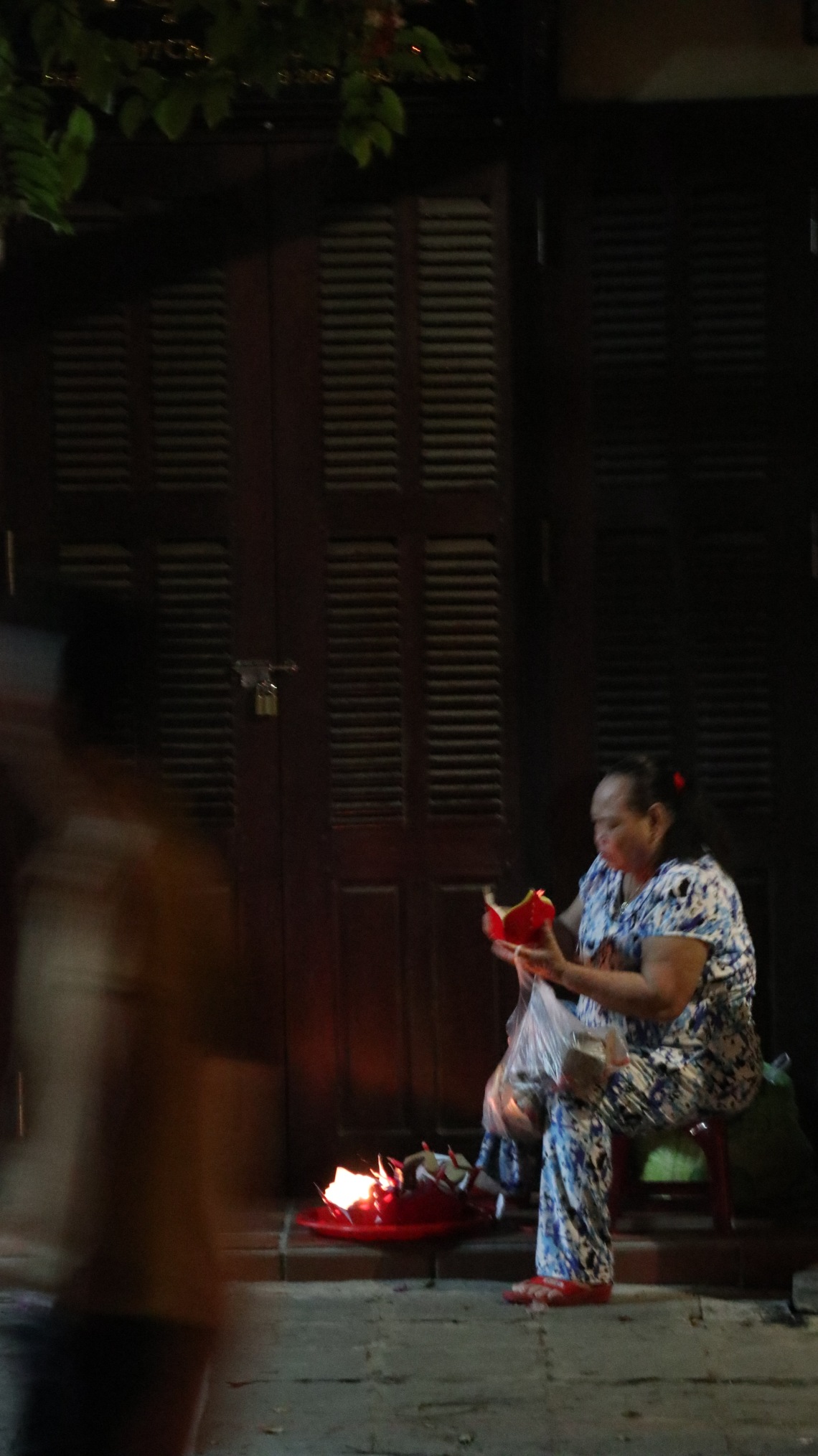 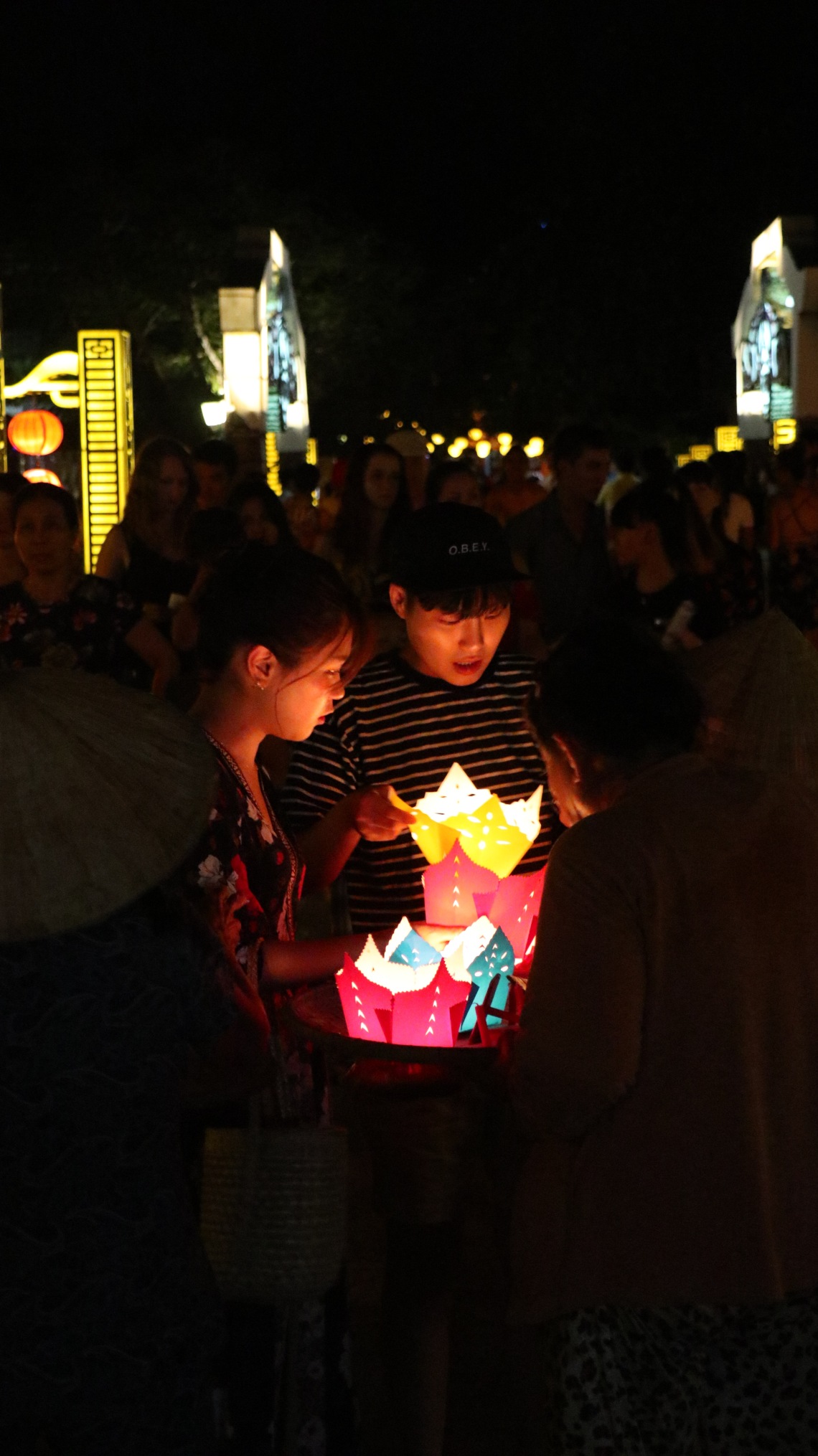 I have recently returned to the UK after many years of living and working as a university lecturer in Seoul, South Korea. I took eight months off to travel the world in 2018. I'm now working freelance as a proofreader, copy editor and writer for my own company, Clean Page Editing Ltd. View all posts by Daniel Deacon