I get to the train station at 8.40, even though the train isn’t due until 8.59. I’m taking the SE1 Reunification Express service to Da Nang and then travelling on to the airport to leave for Singapore. 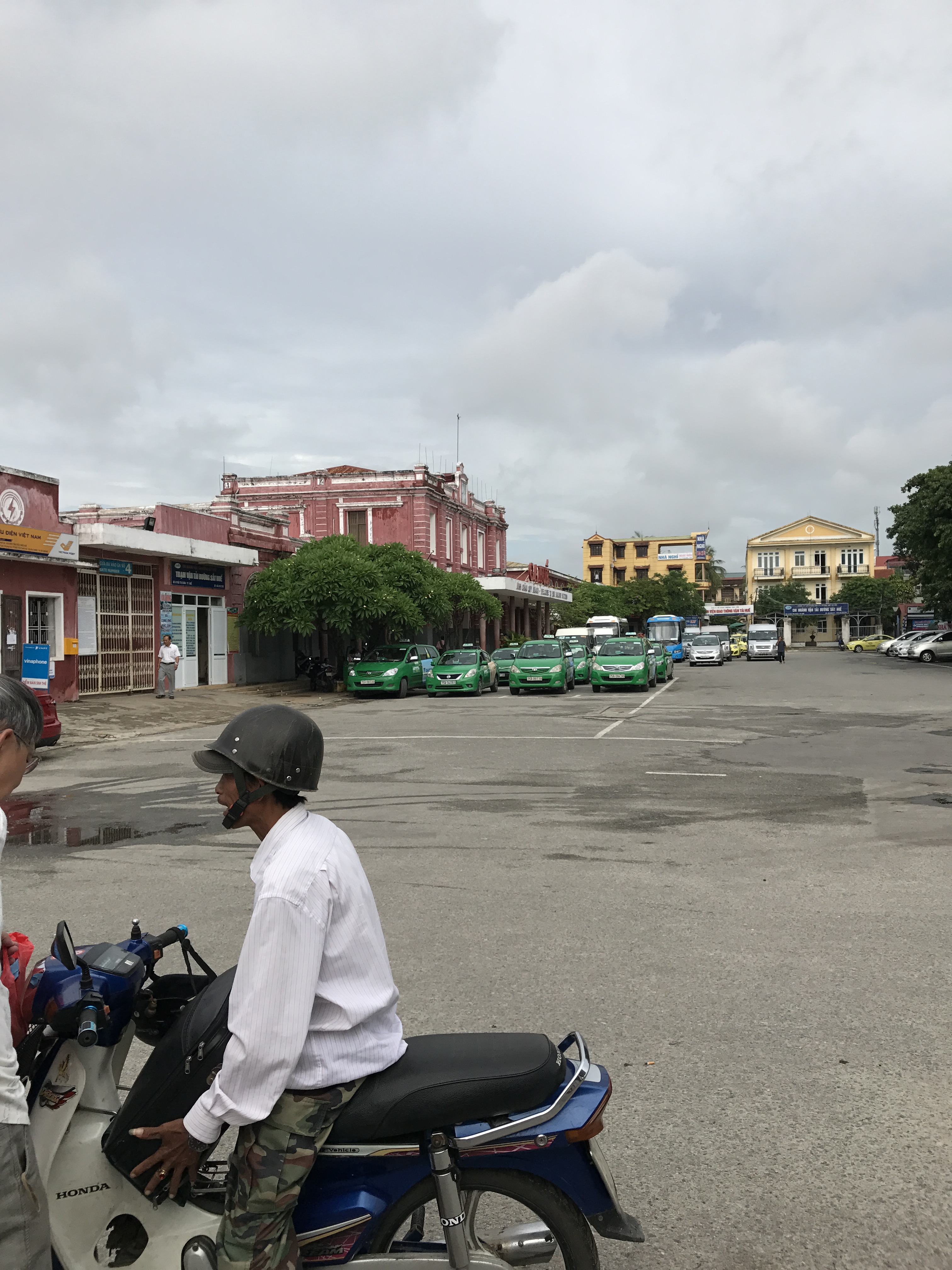 The hotel staff booked my ticket for me yesterday. It cost me 80,000 dong in total (about £3.50), including an extra 20,000 fee (about 65p) for a staff member to go and book me my seat. I’ve gone for a soft seat instead of a sleeper, as the journey is only due to take two and a half hours. I have read that the trains can often be late, so I’ve hedged my bets and I’m taking the first train of the day, which in theory will get me to Da Nang at 11.27. My flight is at 4:20 pm.

The train originates in Hanoi and travels all the way to Ho Chi Minh City. There is an English sign telling me the platform number, and there are signs on the ceiling showing roughly where each carriage will stop. I’m in carriage 12, seat 2. 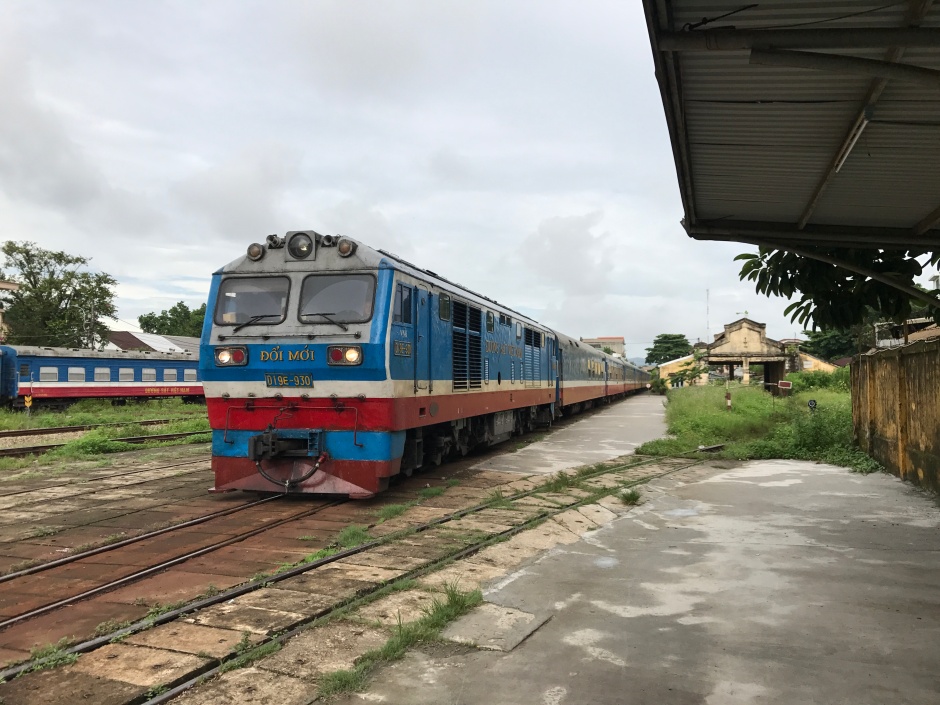 The platform ends at carriage 7-8. I double check with a staff member, and she points me down to the end of the platform where it descends to a pathway alongside the rails. I’ve done a train in Vietnam before, so I kind of know what to expect.

The train is on time. It’s here about 10 minutes before it’s due. I’ve only been on the platform for about two minutes. I pass two older white ladies, and I hear one of them say “Oh, they must have put all the foreigners together.”

We clamber up onto the train, and suddenly we’re in a carriage that contains sleeper cabins. Last time I took a train I was in a sleeper and I apparently got into the wrong cabin and was told off. I’m not sure what to do, and neither are the ladies. They ask a staff member, and she checks our tickets and tells us to go into the first cabin in the carriage.

This is not what either I, Cheryl or Lisa (the two ladies, who are Australian) had expected. However, it’s fine though – the sleeper seats cost double what the soft seats usually should, and at least there is room to stretch out. We put our bags up on the top bunk and we sit down on the bottom bunks and get ready for the journey. The stretch of track from Hue to Da Nang is one of the most scenic in the country, as the rails cling to the ocean front as it snakes around the base of the mountains of the Hai Van pass. 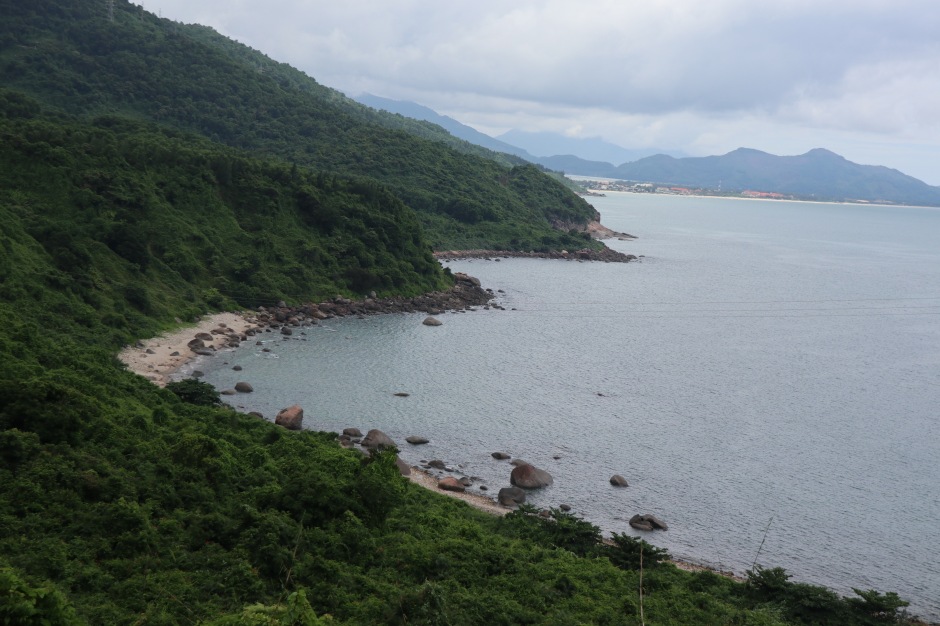 About an hour into the journey we begin to see the ocean, and Cheryl and Lisa (who are facing forwards – I took the seat that goes backwards) suddenly point out the window. I crane my neck and see the train curving around the moutainside. I’ve seen pictures of this kind of thing, but not really seen it in real life. I nip out to the door as there is an open window (the glass in our cabin is a bit grimy) and I spend a good forty minutes or so poking my camera lens out of the window and shooting the train as it snakes around the mountains. 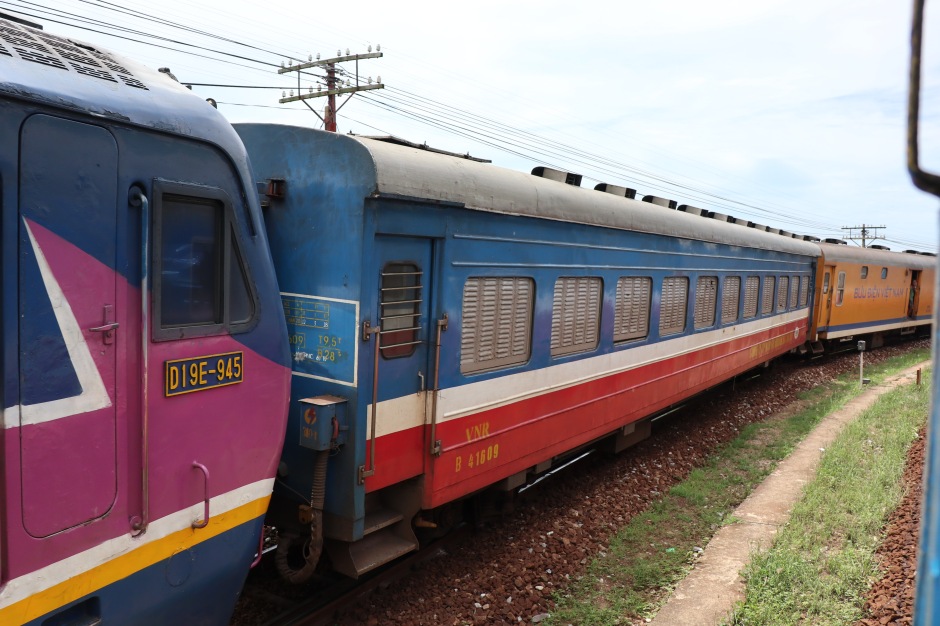 We arrive in Da Nang on time. Cheryl and Lisa are going to Hoi An, and we’ve chatted about it a bit on the journey. I wish them a pleasant stay and we part ways. I decide to sit in the station for a few minutes since I have plenty of time. This will let the taxi touts catch their prey and give me an easier ride when I emerge. I log onto the free Wi-Fi and post a picture on Instagram and then I wander along the platform taking some photos of the train.

When I come out of the station Cheryl is waiting. She and Lisa have got a car and they wondered if I wanted to join them and they can drop me at the airport on the way. I thank her, but what I want to do is get a coffee, so I cross the street and get one, perching on a tiny stool for one last time. Across from me is a sign saying ‘Airport 3 km’. I knew it wasn’t far and it should only take about ten minutes to get there. I make my way back to the station and get a taxi.

There is an official taxi booth outside the station. A man will ask where you want to go and then tell the taxi driver and it should all be metred. I get in the taxi and the driver tells me it’s 100,000 dong to go to the airport. Considering I paid only 80,000 for a train ticket from Hue nearly 200 km away, I know I’m being scammed. I point at the metre. He says 100,000 again. I get out of the car. The man outside asks me what’s going on. I say I’m not paying 100,000 like the driver asked. He responds that it’s all metred, sounding annoyed. I don’t know if he’s annoyed at me or the driver. They have a heated exchange and I get back into the taxi. He turns on the meter. I feel a little weird now, as I’ve probably just got the driver in trouble.

We get to the airport and the metre reads 35,000 dong. Since I have some money left, I give him 50,000 in order to save getting smaller notes that I don’t need. He gives me a thumbs up and drives way.

I’m early. It’s now 12.30 pm and I guess my check in won’t open until three hours before the flight. There’s a coffee and sandwich bar in the check in area, so I spend the rest of my money there on a ham and cheese baguette, and ham and cheese croissant and a doughnut. I’ve had a rule to only eat Vietnamese food on the trip, but I enjoy the comfort food, and I spend the rest of the dong I have left. I figure that it will be a while until we get fed on the plane and I don’t think I’ll get to the hotel until around 10 pm so I might as well be full.

Check in is fine, although I get myself first in line and then the staff rearrange the waiting lines and I suddenly end up six people back. I go straight through to to departures. There’s a long line. It’s a small airport, but they seem to have flights leaving at similar times which leads to long lines (I was warned about this online). At the security scanners there are buckets of bottles and other restricted items, and it’s full of lighters. This makes me think I have to give mine up too so I drop it into the bucket. It’s not the case, so I have to bum a light from other travellers.

Inside departures there isn’t really much going on. I walk several times from one end of the terminal to the other, as the smoking rooms are at either end. By 3.45 our plane hasn’t even arrived, so I continue pacing, and watch as our plane lands and taxis to the gate. I guess we’re not leaving on time, then.

We take off 35 minutes late, but the flight is fairly smooth. For some reason I get nerves when we taxi and head to the runway, but it is a nice, smooth lift off. I’ve paid for an emergency exit row and I have plenty of space to stretch out and relax. I listen to music and close my eyes. I’m tired for some reason. I’ve read some negative reviews of Silk Air – it’s a subsidiary of and wholly owned by Singapore Airlines – but I’m actually impressed. The plane was very clean, the staff were friendly and the food was decent. We even make up time and land on schedule in Singapore.

What surprises me is that Singapore isn’t really what I thought it would be like. I had visions of it being quite sterile, quite strict. Terminal 2 at Changi Airport is actually a bit old school, with heavy brown carpets and old fashioned signage – not the gleaming, minimalistic feel I had in mind.

I get my bags and find the MTR. Again, not as clean and minimal as I thought it would be, given its reputation for being strict and clean. The floor is kind of grimy and it’s small and compact. The subway in Seoul strikes me as much bigger and cleaner. What also surprises me is the mixture of different people on the train – there are Indians and Chinese and Caucasians and Muslims. You don’t really get such a vibrant mix of people on the Seoul subway.

It’s easy to get to my hotel on Smith Street in Chinatown. I follow the map and find the place in a few minutes. I walk straight out of the station along a road to a crossroads, turn right, cross two streets and turn right again. Simple. Some of the market stalls are just closing and there are lanterns strung up across the street. It is very, very humid, however. I had it expected it to be, but this is different to the humidity in Vietnam. It’s thick and enveloping. I can’t even contemplate how people are walking around in jeans and wearing hoodies.

I check in and slip off for a walk around the area. It reminds me a lot of Kuala Lumpur. I quickly find the Sri Mariammam temple, a local landmark, and I stop at a restaurant and get a beer. I balk at the price: $10 for a pint, plus service charge and sales tax on top. I’ve been used to paying almost ninety percent less than that in Vietnam.

I get my wallet ready for a bit of a beating and then head back to the hotel for a deep, long sleep.

Begin typing your search above and press return to search. Press Esc to cancel.